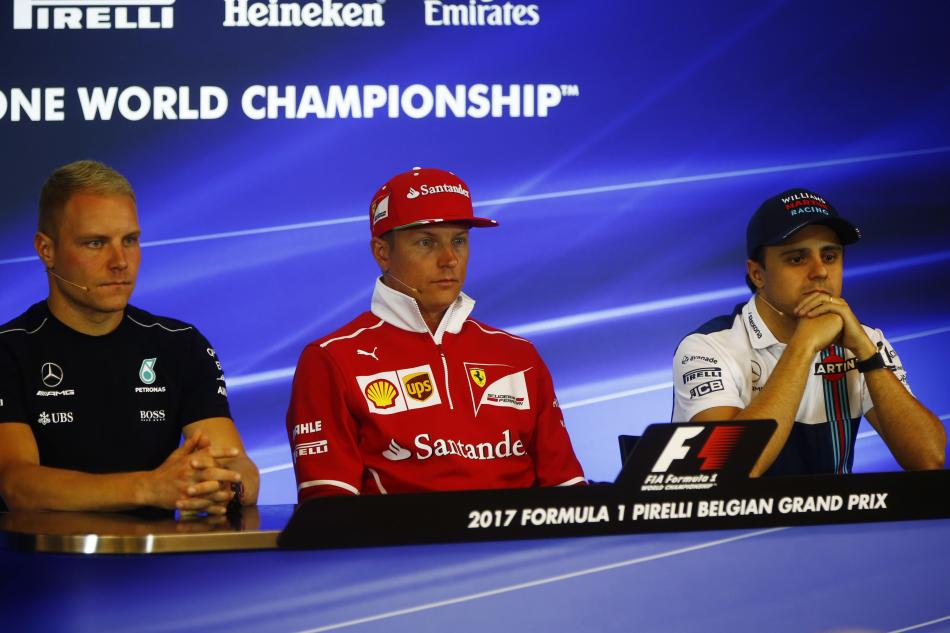 Esteban, back to the scene of your Grand Prix debut where it all started a year ago. In what ways is the driver and competitor that is Esteban Ocon different today from that debutant of August 2016??

Esteban OCON: Yeah, it’s been one year already. It has been mega fast, but now I’m not a rookie anymore. What has changed? Not much, I would say, except that I have been learning massively since the beginning. I’m feeling just more comfortable with the weekends, with the races and just working with Formula One teams of course. And yeah, now, it’s just I hope going to be easier to race on the tracks that I have already raced last year.

Ten points scoring finishes out of 11 so fat this year. Your battle with team-mate Sergio Pérez is one of the stories of the season? Still, though, just the one occasion, at Silverstone, that you have beaten him to the chequered flag. How confident are you that you will start to turn that around in the second half of the season?

EO: Yeah, you know, in the beginning I had a lot to learn definitely. This season I was getting faster and faster in qualifying, I beat him in Budapest, at the last race before the summer break. I’m just getting closer to him all the time. Just giving him a hard time and that’s my target for sure. We raced really close now just before the summer break together. I hope that it will me that I’ve already raced some races last year for the second half and I will make sure I can beat him for the rest of the season.

Thank you. Stoffel, same question in many ways. There’s no getting away from the fact that at the beginning of the season the match up with Fernando has been very much in his favour. But just lately you’ve started to turn it around. Can you tell us what steps you’ve made to even things up?

Stoffel VANDOORNE: Yeah, for us it’s not been a great start to the season, especially with all the trackside problems we have. We missed quite a lot of track time, but lately everything has gone in a good direction. Felt more and more comfortable with the car, with the handling suiting a little bit better my style as well. The last races have been positive. I’m matching very close with Fernando in qualifying and in the races as well. I’m definitely sure that the second part of the season will go in a good direction again.

Well, congratulations on the contract renewal announced before your home GP. This season hasn’t gone as you expected in any respect, so was there any doubt that you’d get another chance?

SV: No, there never has been any doubt. The team has been really supportive in the difficult times. Obviously I’ve been with McLaren for the past couple of years as a young driver and then as a reserve driver, so they know my capabilities. They know the effort I’m putting in with the team and it’s good to see that the team is 100 per cent behind me and I’m definitely looking forward to the future with them.

Very well done. Max, coming to you: a front row qualifier here last season, still the only time in your F1 career to date, so long overdue another one. Is this more or less feasible this year than last year?

Max VERSTAPPEN: I don’t know. Have I been on the second row this year? I don’t know. I think it will be more difficult, but you never know. In general, Red Bull has always been quite OK on this track. We just have to wait and see. It will be quite a special weekend, with so many fans around, so I’m definitely looking forward to that.

And I see you’ve got the orange on the cap – nice touch. You and Red Bull Racing have made quite a radical tyre selection for this weekend, with only one set of softs and nine sets of ultrasofts – much less conservative than Mercedes and Ferrari. In light of the way things went at Silverstone, are you confident you have the right tyre options for the weekend??

MV: I’ll tell you after tomorrow!

Can you tell us a bit more, develop your thoughts on what tomorrow might bring?

MV: Yeah, I don’t know. We just have to go out there and see what the balance of the car is and then of course we try some different tyres and we know the degradation and from there on we’ll go further into the weekend.

But you would describe this a quite an aggressive selection, clearly?

Q: Valtteri, you’re the top scorer in the last six grands prix on 106 points. Eight more than Vettel, 16 more than Hamilton and the only man to finish on the podium on the last five in succession – the best streak of your career: how much more confidently do you start the second half of the season, compared to the first?

Valtteri BOTTAS: Definitely it is nicer, the start of the second half than the first half because I started this season with a new team, new environment, there was so many things for me to get used to and to learn, so now I can just get on with it. So, I’m looking forwards to the second half and nice to be back here in Spa.

Q: We’re seeing a lot of renewal announcements coming through for Stoffel, we just had him here, Kimi obviously. When can we expect yours?

VB: Well yeah. First of all, congrats to Kimi and Stoffel for that. For me, there’s no news yet, and we will tell you the news when there is some.

Q: Kimi, congratulations on your new Ferrari deal. Why is it the right thing for you and your career?

Kimi RÄIKKÖNEN: Well, I wouldn’t do it if I wouldn’t want to, and be happy with it and obviously the team feels the same way so, y’know…

Q: You’ve qualified third or higher on the grid at the last four races and you’re tied three-all with Vettel in the last six qualifying sessions and obviously we all saw you had the pace to win in Hungary. Are we seeing the highest level of challenge from your since your return to Ferrari, do you think?

KR: I don’t know. It’s so difficult to… everybody has their own view of things and obviously we want to do well, we want to improve and I guess you always find things to do better and, that way, find more speed. Lately it’s been a bit better, we’ve been feeling a bit more comfortable and been able to drive as want and obviously the result suddenly looks a bit better. I’m confident we are doing the right things and getting where we want to be.

Q: Felipe, how are you feeling, what was the diagnosis that kept you out of the car in Hungary and are you confident it’s all over now?

FM: Yeah, I feel good, I feel ready to get back in the car. I had a… I was feeling a little bit dizzy on that weekend. Vertigo is the name of what I had and unfortunately it’s the first time I had this. It was a little bit of a strange feeling and unfortunately it happens in a race weekend and keeps me out of the car but I feel good now, ready to get back to the second part of the season and really hopeful we can do good races.

Q: It’s been a bonus year in your career in some ways. It was around this time last year that you announced your decision to retire. Has this season given you a second wind. Do you think you’ll be staying on again for 2018.

FM: Well, I was quite happy to be honest, in the way I was driving the car. The first part of the season, unfortunately I was a little bit unlucky with the result but I was quite happy with the way I am driving the car. And when I see that, I don’t see the point not to carry on. So if I have an opportunity to stay in the position I believe is correct for me to stay, yes I believe maybe I can stay for another season. Otherwise not. I’m quite relaxed about my future in one way or the other, to be honest. So I think maybe just thinking about the races and we’ll see what happens.