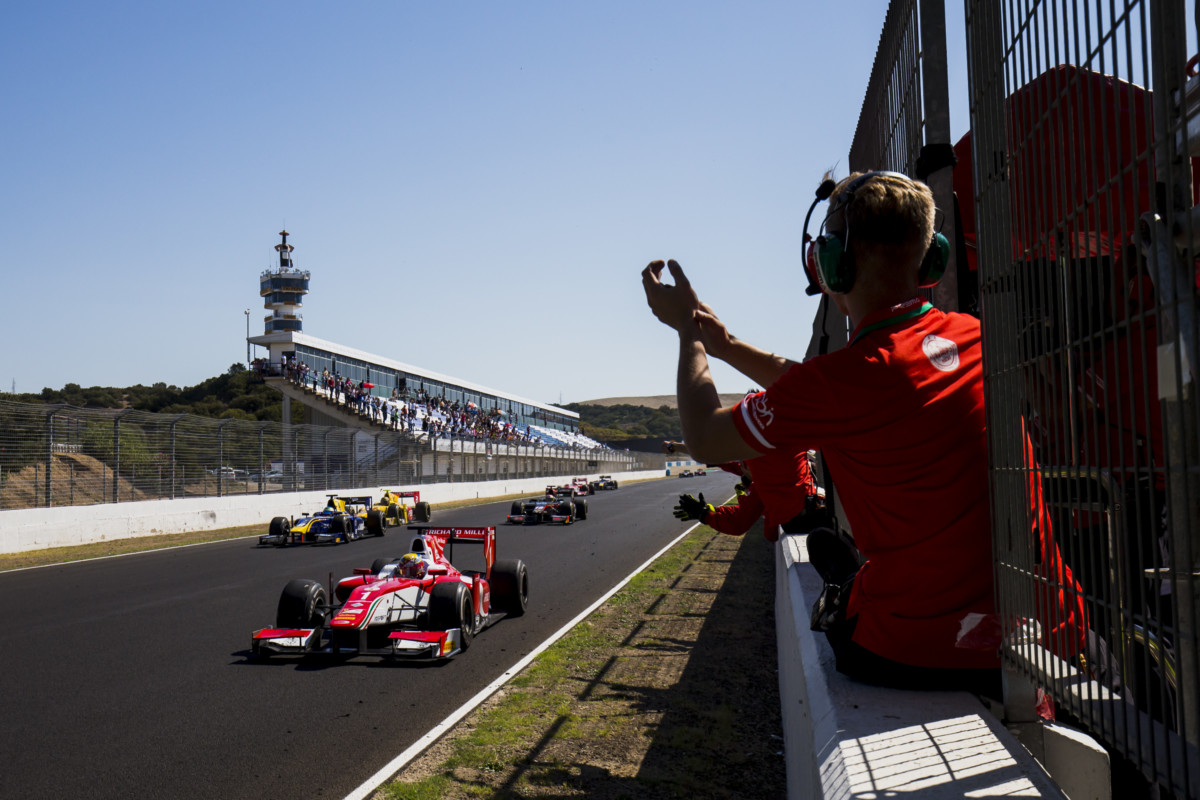 Charles #Leclerc is the first FIA #Formula 2 Drivers’ Champion after claiming victory in this afternoon’s feature race at the Circuito de #Jerez,

leading all race long apart from the pitstop crossover and hanging on despite slowing enormously on the last lap as his tyres gave up to cross the line 0.2s ahead of title rival Oliver Rowland and teammate Antonio Fuoco.

Temperatures soared as the grid formed behind poleman Leclerc, with the Ferrari Academy driver easily containing front row starter Luca Ghiotto into turn 1 ahead of Sergio Sette Camara and Alexander Albon, with Rowland clinically dispatching the pair as he fought for his slender shot at the title: the Briton closed on the Italian but was unable find a way by as Leclerc built a huge lead over the pair ahead of their pitstops. As expected most of the field started on the soft compound tyres, with pitstops coming as early as lap 7: Sette Camara became the target man after stopping on lap 9, with Ghiotto in 2 laps later but unable to contain the Brazilian after a slow stop. Leclerc and Rowland came in next time by, with the Monegasque out in P5 and Rowland emerging 2 places back before also being passed by Sette Camara and Albon.

As Leclerc started to pass the medium shod drivers and headed back to the front, Rowland had to following suit, dispatching the pair on lap 15: the Monegasque driver finally reclaimed the lead from Nicholas Latifi, who waved him through on lap 19, with Rowland grabbing second 2 laps after fighting his way through the traffic, and Ghiotto finally re-joining the top 3 after battling his way past Fuoco, who was one of the last drivers to pit for fresh rubber. Latifi and Fuoco were soon putting their new tyres to work, fighting their way up the grid against rivals on older rubber, but it looked to be an effort in vain until Santino Ferrucci and Nobuharu Matsushita came together at turn 1 with the American coming off second best, stopping in the barriers and prompting a safety car period to remove his car, closing the field in the process and turning the tyre strategy on its head.

Leclerc had a lapped Sean Gelael on fresh tyres between himself and Rowland as they toured around, and when the race went live on lap 35 the Monegasque driver eased away at the front of the field with the Briton slicing by the Indonesian to chase his rival for the closing laps. Fuoco was soon charging towards them, easily passing Sette Camara, Latifi and Ghiotto to put himself on the podium. On the final lap Leclerc tyres were spent: he slowed dramatically, bunching up his pursuers who also had to content with a battle between Gelael and Louis Deletraz as they looked in vain for a line past Leclerc, who had just enough left to lead the group over the line as he claimed his 6th victory of the season, and with it the 2017 title. Rowland just held out Fuoco for P2, with Latifi breathing down their necks in 4th, while Markelov was a fine P5 after a first lap tangle ahead of Jordan King, who made the alternate strategy work for him after mugging Ghiotto on spent tyres late in the race. Alex Palou was a splendid 8th on his debut, picking up the reverse pole for tomorrow’s sprint race, ahead of a strong drive by Nabil Jeffri for P9 and a distraught Sette Camara who also ran out of rubber in 10th.