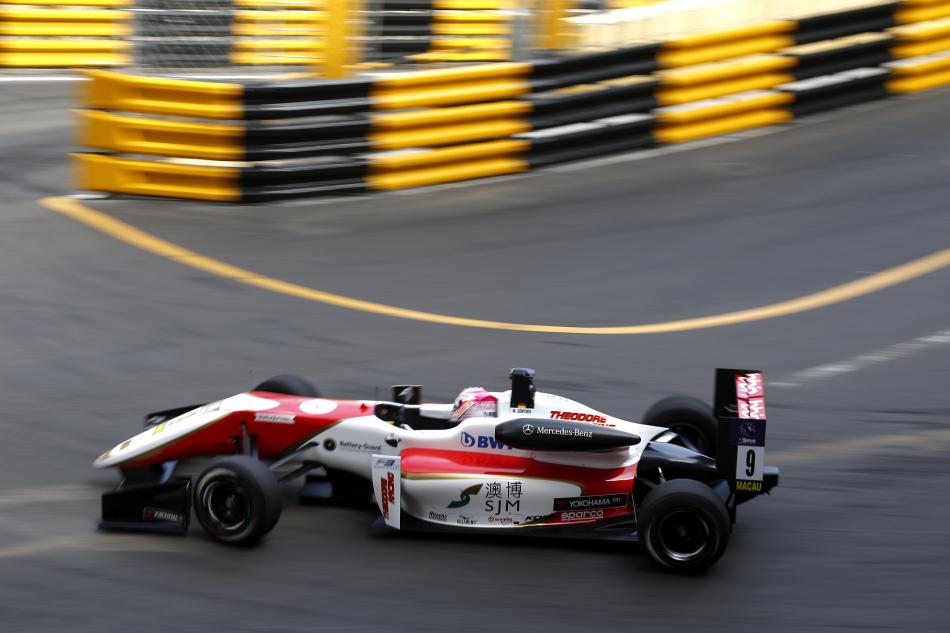 Callum Ilott ( SJM Theodore Racing by Prema Dallara Mercedes) executed a brave and beautiful passing move on pole sitter Joel Eriksson on the high speed Mandarin corner to win the FIA F3 World Cup qualifying race at Macau. In a race uninterrupted by red flags Ilott sprinted away from Eriksson (Motopark with VEB Dallara VW) in the last third of the 10 lap race to win by a dominant 7.5 seconds. Sergio Sette Camara, Eriksson’s team mate, surged through from ninth grid position to claim third place, challenging Eriksson for second in the last two laps. FIA F3 European champion Lando Norris fell to ninth from his front row starting position beside pole sitter Eriksson, worked up to fifth but fell away to salvage seventh. Norris bogged down badly at the start and was swamped by his rivals.

Eriksson converted pole into a commanding lead into the right hand Lisboa corner at the start from a fast charging Ilott and Max Gunther (SJM Theodore Racing by Prema Dallara VW), both from the second row. By the end of the first lap Sette Camara had already moved from ninth to fifth and continued his charge up the field. Sette Camara had crashed twice in practice and today’s third place has done a lot to give him confidence for the World Cup. Ilott’s move to pass Eriksson on lap seven of ten came as the Swede’s tyres began to severely degrade.

“ I saw Callum coming on the way into Mandarin corner but I wasn’t expecting him to try there,“ said Eriksson. The two drivers jockied side by side on the way out of the blindingly fast Mandarin and entered Lisboa corner side by side. Ilott successfully defended and then opened a gap of up to two seconds a lap by the chequered flag. Eriksson, who had started the race on used tyres to preserve his allocation of new rubber for the FIA World Cup lost ground to team mate Sette Camara but resisted several passing lunges to claim second by 0.6secs. Gunther withheld a strong charge from Ferdinand Habsurg (Carlin Dallara VW) to take fourth by less than 0.6sec with Pedro Piquet(VAR Dallara Mercedes) sixth ahead of Norris seventh. Drivers will start the 15 lap FIA F3 World Cup from grid positions determined by their finishing places in the qualifying race.