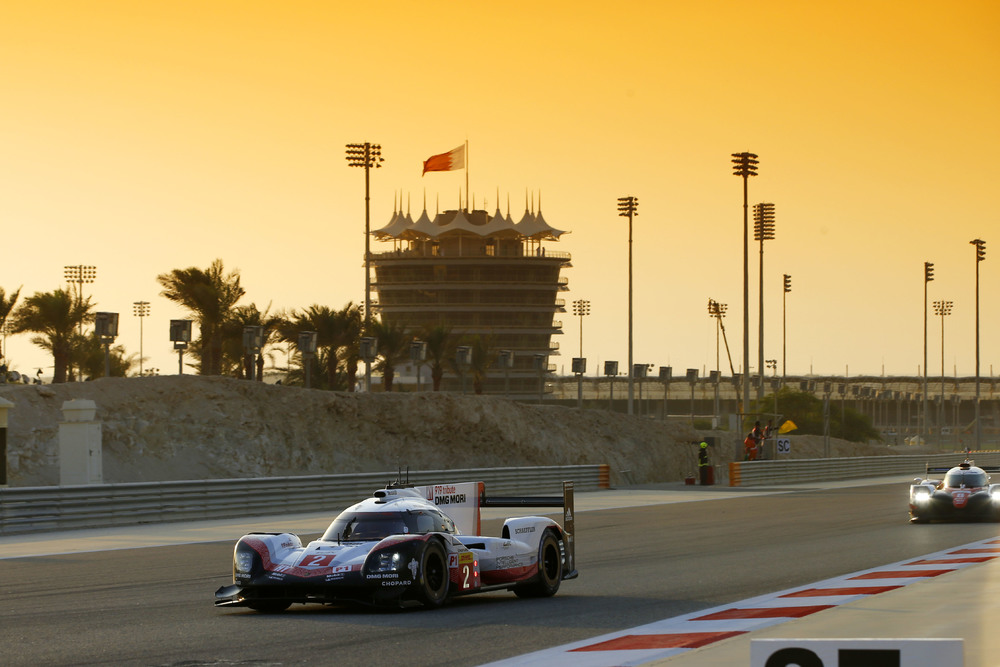 With two podium finishes at the last round in Bahrain, the Porsche LMP Team bid a fond farewell to the FIA WEC. Drivers Earl Bamber (NZ), Timo Bernhard (DE) and Brendon Hartley (NZ), who were crowned world champions two weeks ago, finished second in what was an incident filled and highly emotional 2017 finale. This year’s Le Mans winners dropped behind after an early incident but impressively fought back. The sister car, shared by Neel Jani (CH), André Lotterer (DE) and Nick Tandy (GB) started from pole position but also suffered a set-back after a collision and a subsequent penalty. Lotterer clocked the fastest race lap and finished in third position after six hours of racing. Toyota won the night race.

With this race, that was green flagged by Matthias Müller, Chairman of the Executive Board of Volkswagen AG, one of the most successful chapters of Porsche’s motorsport history comes to an end. From 2015 to date, the Porsche LMP Team took three consecutive Le Mans outright victories plus three successive manufacturers’ world championship titles while Porsche 919 Hybrid drivers won the drivers’ world championship title on three occasions. Since the 919’s debut in 2014, the tally from 34 races is 17 wins with seven of them being one-two victories. Furthermore 20 pole positions and 13 fastest race laps were achieved.

Oliver Blume, Chairman of the Executive Board of Porsche AG: “No other Porsche team has ever managed three Le Mans outright victories in a row but this squad achieved it. I thank them very much for this. I’m extremely proud of every single team member. They have mastered a mammoth task with hard work, consistency and the right approach. To me this represents the Porsche spirit that our brand stands for spanning almost 70 years. Now the team of Fritz Enzinger and Andreas Seidl face its new challenge: to enter Formula E for season number six at the end of 2019.”

Michael Steiner, Board Member for Research and Development at Porsche AG: “An era comes to an end with the last race entry of the Porsche 919 Hybrid. We have often shown in our company’s history that inventiveness, experience and courage can make a highly complex and successful race car. The 919 achieved almost everything possible in its four years and demonstrated the predominance of hybrid power. The combination from a highly efficient combustion engine and a powerful electric drive reached a new level with the 919 Hybrid. We consequently follow this path with our road sports cars.”

Fritz Enzinger, Vice President LMP1: “Today a very successful era comes to an end and this is the right time to say thank you. Foremost I want to thank the Board who had the faith to give me the project, supported me a lot and always gave me the feeling I was the right choice. Personally, I was only convinced about this when we took our first race win in São Paulo back in 2014. Thanks to all our drivers who took every chance and delivered the highest performance. Finally, it was 17 wins in 34 races. Thanks to everybody in the team for their relentless work and euphoria for the project. There was nothing I enjoyed more than seeing the instinct to win in their eyes on race days! Today is also the right time to pay my gratitude to our Team Principal Andreas Seidl: For the last two years, Andreas mastered the dual role of Team Principal and Technical Director in a superior manner with the first 919 that was developed under his guidance winning the world championship. And finally: It is great a company like Porsche exists. If I had to put the six years I’m with Porsche in one sentence it would be: I was allowed to live my dream. Thanks for the project and thanks for the freedom of scope.”

Andreas Seidl, Team Principal: “Over the past four seasons, Toyota has been an incredible competitor, and I congratulate them on today’s victory. Thanks to the whole team here and in Weissach, to our drivers and partners for four sensational years. This definitely was the last race for the 919 Hybrid. We are very proud of the success we were able to achieve with this technology driven car. Next year we will celebrate these innovations with some very special events. But these details will be unveiled at a later date. “

Drivers Porsche 919 Hybrid car number 1:
Neel Jani (33, Switzerland): “The start was good and at the beginning we could more or less match the pace of the Toyotas. But as soon as we were in traffic, they just had this little bit more than us and over the distance we had to let them go. I really, really enjoyed playing with the boost today and all of the tactics for the last time. I was very aware that we were doing everything for the last time. It has been an amazing journey to be part of such a big project with so many great people.”

André Lotterer (35, Germany): “I had a smooth stint. The 919 was good and I really enjoyed driving it today. I had one little issue lapping an LMP2 causing me to lock-up which resulted in big flat spots on my tyres towards the end. It’s a shame we had contact earlier in the race but bad luck has been the story of our car’s season. I’m very happy that I was able to do 50 WEC races and drove these amazing cars. The 919 has been a very successful car and I’ve enjoyed the season racing with Porsche.”

Nick Tandy (33, Great Britain): “I enjoyed the race. It was good fighting and we were all pushing really hard. We got ambitious and tried to do a triple stint on one set of tyres, it all looked good. Unfortunately I had contact with another car in the middle of the race. A clear misunderstanding that ended with punctures for both cars which set us back. This, plus the penalty, were tough ones to take but we gave our best in the race. We knew we had to do everything possible to take the fight to Toyota today. It was a pleasure to drive with Neel and André over this season and to be part of this team.”

Drivers Porsche 919 Hybrid car number 2
Earl Bamber (27, New Zealand): “We were on the back foot after Timo unluckily had to make an early pit-stop. But we never gave up, kept things clean and I personally didn’t have any problems during my stints. I just ticked the laps off and enjoyed my time in this monster for the last time. It was a real pleasure today as it has been for me throughout the 919 programme. Porsche came up with the crazy idea of putting a little guy from the Carrera Cup in the 919 Hybrid for Le Mans. So, I must thank everyone at Porsche who believed in the pyramid system which gave me that opportunity. Everyone at Weissach worked so hard throughout the programme. It has been an honour to drive for Porsche at the highest level of motorsport. Congratulations must also go to Toyota on a great win today – they really raised their game over the past couple of races.”

Timo Bernhard (36, Germany): “I had a good start, got past one Toyota and kept up with Neel. But then unfortunately I picked up that bollard and the extra stop dropped us far behind. That was a real shame. But the race result is secondary today. It is the end of great era. I’m honoured having been part of this programme from the very beginning until the last lap. A great crew, great people and great team mates. I will miss them. This programme definitely is the highlight of my career.”

Brendon Hartley (28, New Zealand): “We were out of contention early on today. Timo having to pit early in the race was really unlucky and to hit this bollard in the middle of the road wasn’t his fault at all. It put us on the back foot but we fought until the chequered flag with the stints going pretty smoothly. It is good to have both cars on the podium today but it is mixed emotions. I’m honoured having been part of this programme and I will miss it.”