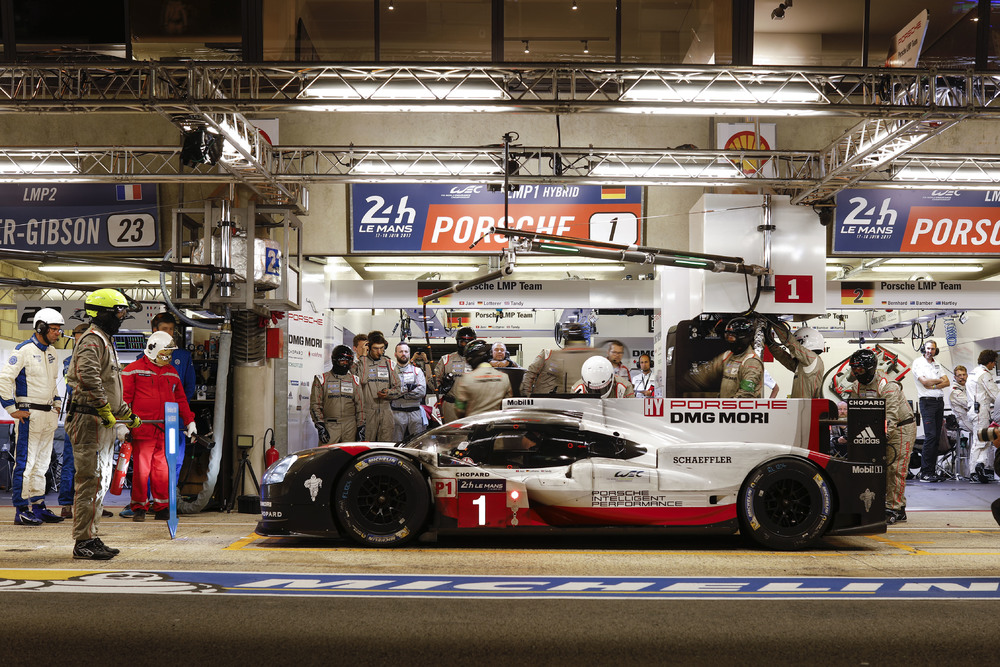 After three straight outright victories at the 24 Hours of Le Mans and six world championship titles for the 919 Hybrid in the FIA WEC, the Porsche Team would now like to express its gratitude to its partners. The six-hour race in Sakhir/Bahrain on 18th November marked the end of Porsche’s successful involvement in the LMP1 class of the WEC. This coming year, the innovative 919 Hybrid embarks on an extensive farewell tour with numerous events. The era of the technology showpiece comes to an end in the autumn of 2018 – its last journey will lead the 919 to the Porsche Museum. Porsche honours its long-standing partners with a special movie. The thank-you video, which has gone viral, is now playing on the Porsche homepage under the link www.porsche.com/partner.

“With its partners, Porsche has written an exemplary success story with the 919 Hybrid,” emphasises Fritz Enzinger, LMP Vice President. “Many of them have been on board since the project started in 2014 – this abiding trust makes us extremely proud. Several of these companies have inspired us through collaborating in research and development, with others, the joint brand outings has led to strong synergies. By joining forces, we’ve successfully brought the “Mission: Future Sportscar” to life. I would like to express my heartfelt thanks for this commitment, involvement and extraordinary trust.”

As the exclusive premium partner, the merger of two of the world’s leading manufacturers of machine tools has made a major contribution to the Porsche Team’s success over the past four years: DMG MORI AKTIENGESELLSCHAFT, Bielefeld, and DMG MORI COMPANY LIMITED, Tokyo (Japan). The automotive industry is one of the mainstays of DMG Mori’s expansion alongside other high-growth sectors such as aerospace, medical and energy technology. As a leading innovator in the machine tool industry and technology partner, DMG MORI has made a major contribution to the success of the Porsche Team.

Chopard, the Porsche LMP Team’s official timekeeping partner from the very beginning, was founded in 1860 by Louis-Ulysse Chopard and was taken over and managed by the Scheufele family in 1963. Today, the Geneva-based company is one of the world’s most successful manufacturers of jewellery and watches, with 1,700 employees and branches in Europe, Asia and North America. Schaeffler, the German industrial and automotive supplier and the squad’s official technology partner, has also been on board since the launch of the project. In terms of energy efficiency and future technologies, the multinational company shares the same goals as the LMP team and intends to help shape the mobility of tomorrow.

As the official communications partner of the Porsche LMP Team and part of the Vodafone Group, Vodafone Global Enterprise offers communication services for multinational companies. The global data network of Vodafone Global Enterprise includes established and expanding markets in 150 countries. Over 3,000 employees take care of more than 1,700 corporate clients worldwide. The renowned tyre manufacturer Michelin from France and the United States energy company Exxon Mobil Corporation, with its lubricant brand Mobil 1, traditionally use their motorsport commitment, and consequently the 919 Hybrid, to develop and test new technologies that also benefit Porsche’s production vehicles. Both companies have supported the Porsche Team from day one of the project.

The lighting manufacturer Trilux from Germany’s Arnsberg has backed the LMP Team as an official lighting partner with custom-made, energy-efficient and future-proof lighting solutions. The brewery C. & A. Veltins, as a long-standing partner of Porsche Motorsport, has also supported the squad as actively as the battery cell manufacturer A123 Systems from Michigan (USA) and SBG Sports Software from England. The modern furniture maker Walter Knoll lent the Porsche Hospitality facilities a distinctive atmosphere and exclusive look at the WEC racetracks. Hauser Catering satisfied the culinary needs at race pace, with Red Bull supplying guests and the LMP Team with energy drinks. Alpinestars attired the drivers with flame-retardant yet lightweight race clothing, with UVEX providing the Porsche Team with protective gear. The commercial vehicle manufacturer Scania and the tool supplier Hazet provided further support towards the successful implementation of the demanding LMP race project.

Porsche will continue its campaign in the FIA WEC with the 911 RSR, with four factory-run vehicles fielded in the GTE-Pro division at the 2018 Le Mans 24-hour race.