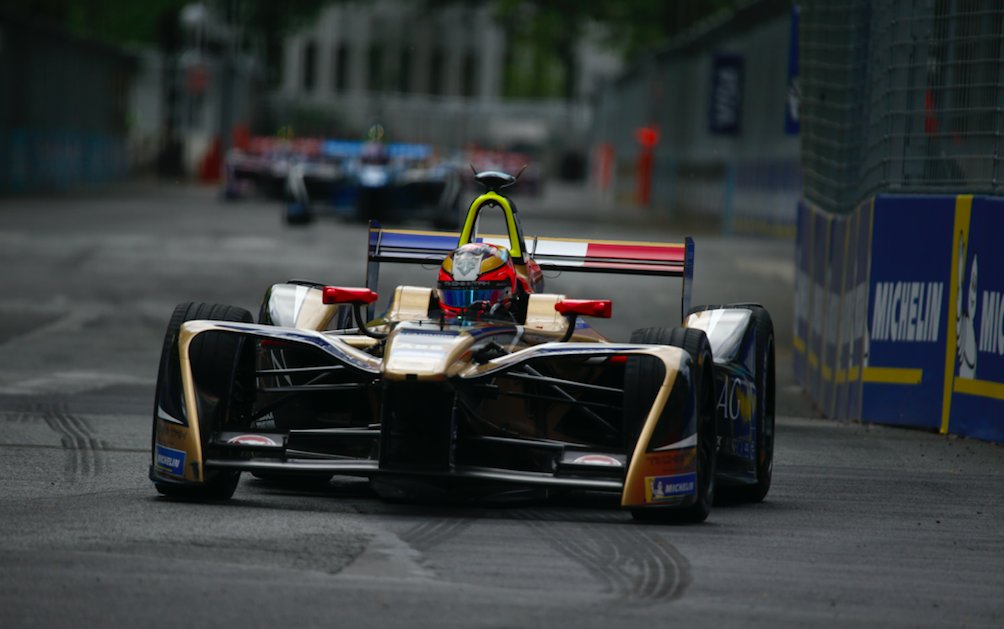 After a turbulent and testing race in the heart of Paris, it was a fairytale ending for home race hero Jean-Eric Vergne (Techeetah), who stormed to victory in front of a packed home crowd. Following the Frenchman across the line was Audi Sport Abt Schaeffler’s Lucas di Grassi in second, followed by DS Virgin Racing’s Sam Bird in third. But, as we’ve come to expect in the ABB FIA Formula E Championship, the outcome was far from predictable here in Paris, with chaos in the closing seconds of the race resulting in a surprise ending. Just minutes into the start of the race, MS&AD Andretti Formula E’s Tom Blomqvist piled into the back of Prost, leaving Blomqvist sandwiched between the Frenchman and Panasonic Jaguar Racing’s Mitch Evans behind. Behind them was Ma Qing Hua, who was left stranded on the grid, unable to pull away.

From the off, home race hero and championship leader Jean-Eric Vergne (Techeetah) led the charge, followed closely by DS Virgin Racing’s Sam Bird in second and Techeetah’s Andre Lotterer in third. For Panasonic Jaguar Racing’s Mitch Evans, he had another battle on his and was another battle for the New Zealander as he attempted On lap eight, Audi Sport Abt Schaeffler’s Daniel Abt passed Mahindra Racing’s Felix Rosenqvist on the outside edge, before climbing one more place as the German driver slipped past Dragon’s Jose Maria Lopez on the inside. Shortly after, on lap 16, Abt slipped past NIO Formula E Team’s Oliver Turvey to climb yet another position to seventh. After starting the race in 15th, Abt was understandably determined to improve his standing and was showing no signs of slowing. With Bird holding his own, sandwiched between the tho Techeetah drivers, the three drivers pulled away from the pack, with Vergne still leading the way. With energy starting to run low, particularly from Blomqvist in 17th who was the first to pit, Bird made a bid for the front, locking up the wheels as he broke late into the corner. Unsuccessful, all three frontrunners headed into the pits at the same time, emerging from the pit lane in the same order.

Further down the gird, reigning champion and Audi Sport Abt Schaeffler driver Lucas di Grassi pulled out of the pits in fourth place with Venturi Formula E’s Maro Engel hot on his tail followed by last year’s winner Sebastien Buemi (Renault e.dams). By lap 30 Abt was on the move again, jostling with Buemi for sixth place. Building up pace down Boulevard de la Tour-Maubourg, Rosenqvist squeezed himself in between Lopez and the inside wall on Turn 10 to climb up to eighth. Back at the front, Vergne was leading by over two seconds by lap 35, leaving Bird and Lotterer to battle in third and fourth. Finding his moment, Lotterer broke late into Turn 10, cutting off Bird mid-turn, with the German driver gaining a place from the Machiavellian manoeuvre.

Also seeing a chance to improve his position was Audi’s Lucas di Grassi who caught Bird off guard, slipping into third place, leaving the DS Virgin Racing driver two places down in just a matter of seconds. After Venturi’s Edoardo Mortara clipped Jose Mara Lopez on Turn 10, the Swiss driver was forced out wide, unable to make the turn. With Mortara briefly stopped on track, the cars continued under a yellow flag. On lap 44, Abt was on the hunt again with Buemi in his sights. Putting his FANBOOST to good use, the German slipped past the Renault driver and moved up into sixth. Reminiscent of this seasons’ showdown in Punta del Este, it was Audi vs Techeetah as di Grassi and Lotterer fought a brutal battle in second and third. With just seconds to go, Lotterer had depleted his energy after battling hard. Crawling along, just meters from the finish line, the Techeetah driver was helpless as di Grassi passed him to take second. With energy to spare, Bird failed to judge the pace of the stricken Techeetah car, piling into the back of Lotterer and shattering the DS’ front axle. With only three wheels, Bird limped across the line in third, leaving Lotterer, with a broken rear spoiler, to crawl across the line in sixth. Meanwhile, blissfully unaware of his teammate’s fate behind him, Vergne cruised to victory, waving at the adoring home crowd as he passed by on his way back into the pit lane.