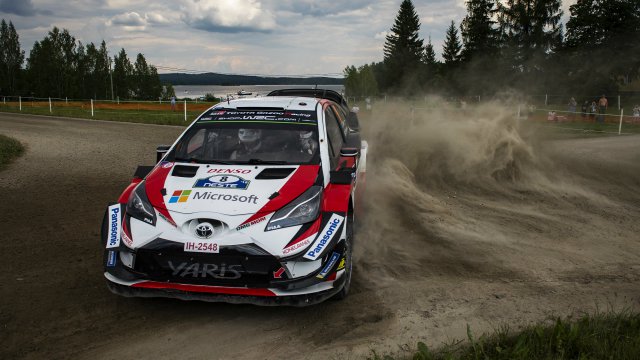 The Toyota Yaris WRC continues to lead Rally Finland after an exceptional performance on Saturday, when it won all eight stages. Ott Tänak increased his leading margin to 39 seconds, Jari-Matti Latvala consolidated his podium position and Esapekka Lappi charged from eighth to fourth.

During the afternoon, the three Toyota drivers posted the three fastest times on three consecutive stages, demonstrating the team’s strength on its home roads. Tänak won all four stages in the morning loop as he opened his rally lead up from 5.8s to 23.7s by mid-day service. Despite then adopting a more cautious approach in the afternoon, he continued to out-pace his nearest rival to sit more than half a minute clear with four stages remaining on Sunday. Latvala displayed consistent speed throughout the day – sharing a stage win with Tänak at the start of the afternoon – to close on the driver in second place overall, reducing his deficit to 5.4 seconds. Lappi gained two places on the first stage of the day and another two later on as he won each of the last three stages.