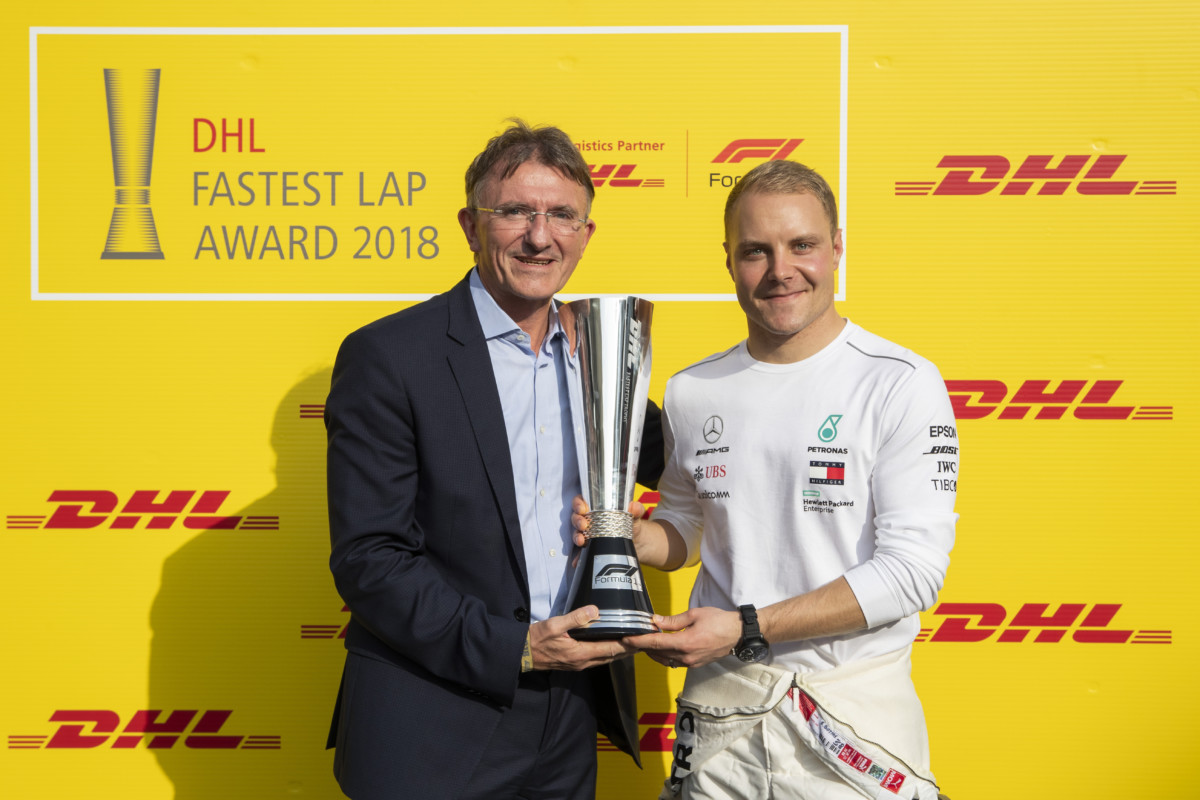 This was the first time for Valtteri Bottas to win the much-coveted award. By contrast, it has become almost routine for Mercedes: it is the fifth time in a row that a Mercedes driver has won the DHL Fastest Lap Award. The Award had previously been won by Lewis Hamilton (in 2014, 2015 and 2017) and by Nico Rosberg (in 2016). This makes Mercedes the most decorated team in the Award’s history. Previously, Mercedes had been neck and neck with the Red Bull Racing team, which has already won the Award four times. It was presented to Sebastian Vettel in 2009, 2012 and 2013 and to Mark Webber in 2011.  The DHL Fastest Lap Award was established in 2007 to recognize the driver who most consistently demonstrates highest levels of speed, setting the fastest lap at the highest number of races each season. The award rewards characteristics such as excellent performance, passion, can-do attitude, reliability and precision – all of which are needed for the winning driver to be successful across the season.

New tire compounds enabled new levels of speed with an impressive number of lap records set during the 2018 season, with best times being recorded in Spain, Monaco, France, Austria, Belgium, Singapore, Russia, the US, Mexico and Brazil. As well as this, a very special record was achieved this year. Kimi Räikkönen set the record for the fastest lap in Formula 1 history during qualifying for the Italian Grand Prix, achieving an average speed of 263.588 km/h. Valtteri Bottas, who finished a respectable fifth in the Formula One World Championship, was delighted to receive his award. “I’m happy to receive this trophy. It was quite a tough season for me personally, I was expecting more, but receiving this award brings back positive memories from this year. It also shows that I had a very decent pace in most of the races. I’ll find a special place for this trophy back at home,” Bottas said.

This year’s DHL Fastest Pit Stop Award provided a close competition; decided in the final race of 2018, it went to the Red Bull Racing team. As Official Logistics Partner, DHL has been presenting this award to the team that has consistently been the best pit stop performer since 2015, rewarding perfect planning and absolute precision at breathtaking speed which are required to deliver the pit stop right first time. Pit stops are possibly the most visual evidence of why Formula 1 is a team sport. This is the first time Red Bull has won the award, with the Mercedes team having won it last year. Sebastian Vettel and his Ferrari team achieved the fastest pit stop of the season at the Brazilian Grand Prix at Sao Paulo with a time of 1.97 seconds. Nobody managed to beat the world record of 1.92 seconds set by Felipe Massa for Williams in 2016 this season. All in all, there were 538 pit stops during the 2018 Formula 1 season.

he DHL Fastest Pit Stop Award was presented in Abu Dhabi by Emanuele Niri, the winner of a design contest organized by DHL earlier this year. The winning trophy design was selected by a high-caliber jury consisting of Ross Brawn, Managing Director, Motorsports Operations F1, Arjan Sissing, Senior Vice President Group Brand Marketing at Deutsche Post DHL Group and Ellie Norman, Director of Marketing and Communications F1. The concept by Emanuele Niri won over the jury with its well-thought-out design, inspired by the components and tools that enable teams to push the boundaries of a pit stop. The synthetic-polyamide 3-D printed trophy symbolizes the teamwork, innovation and excellence of pit stops in F1, with elements of the trophy resembling the mechanics working side-by-side.

DHL has been involved in Formula 1 for over 35 years. As Logistics Partner, the company ensures that the demanding logistics requirements of the elite world of motor racing are met without a hitch. DHL delivers vehicles and replacement parts as well as marketing and hospitality equipment to race venues around the world via air, ocean and land freight solutions. “As a company, we share many values with Formula 1. Speed, precision, teamwork and a pioneering spirit are just as important for our logistics as they are for Formula 1 drivers and teams,” explains Ken Allen, Global CEO at DHL Express. “Other customers – not just those involved in motorsports – also benefit from our decades-long partnership with Formula 1 and the expertise that we have gained from it.”