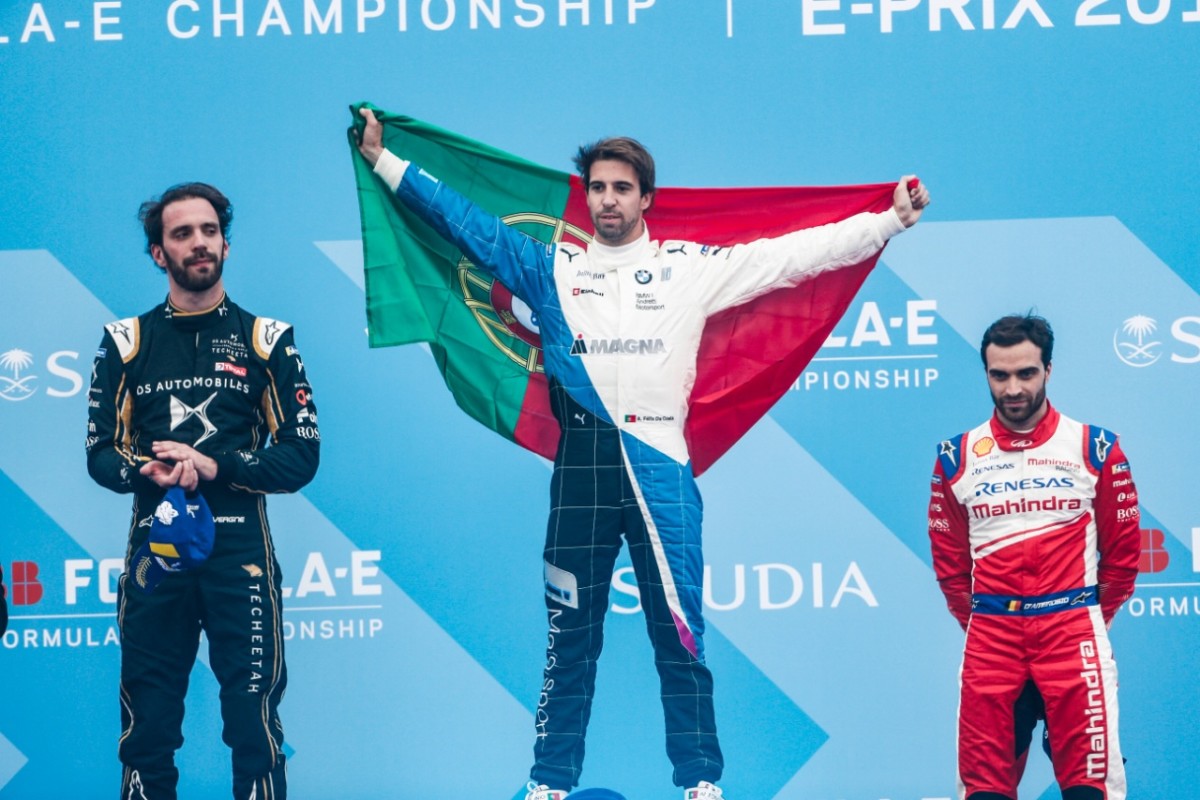 Antonio Felix da Costa narrowly clung on to victory in Ad Diriyah, fending off a fast-charging Jean-Eric Vergne in the closing laps to deliver a maiden win in the ABB FIA Formula E Championship for BMW i Andretti Motorsport. The Portuguese driver led away from pole position – despite the blushes of having to reverse into his grid slot after overshooting his mark. Da Costa looked comfortable out front in the opening phase of the race confirming the pace of the BMW powertrain shown in pre-season testing. However, the ominous speed of DS TECHEETAH and Vergne meant Da Costa briefly dropped to second, before the reigning champion fell down the field as he served a drive-through penalty for a technical infringement relating to power regeneration.

Vergne exited the pits in fifth and fought his way through the pack and back onto the tail of the race leader. With a late safety car to recover Jose Maria Lopez’s GEOX DRAGON machine – which suffered suspension damage – the cars closed up and gave Vergne a chance to make a lunge for victory. Even though the gap reduced to under half a second, the countdown clock ran out with Vergne having to settle for second place.

Joining Da Costa and Vergne on the podium was Jerome D’Ambrosio in his first race for MAHINDRA RACING. Starting the race in sixth, D’Ambrosio held position over his nearest rivals, including Andre Lotterer who missed out on a podium place – suffering the same fate as his team-mate with a penalty. With an exciting new era of electric racing underway, Formula E returns to Marrakesh on January 12 – for round two of the 2018/19 ABB FIA Formula E Championship. There’s all to play for in the closest, most intense and unpredictable racing series on the planet.

Antonio Felix da Costa, BMW i Andretti Motorsport: “I feel good. I’ve had two really hard years to be honest. You know how it is, this motorsport world – people quickly forget, and you’re only as good as your last race. It wasn’t always easy, but it was always the plan. We kept together, kept working hard – I have to thank the team for that.”

Jean-Eric Vergne, DS TECHEETAH: “First of all, I want to congratulate Antonio and BMW – I know how it feels to have a couple of hard years. I think we had an amazing venue racing in the desert. I want to wish a massive welcome to DS in our team – I wanted to do it with a win, but I’ll take what I have today. All I can promise them is to fight for more wins.”

Jérome D’Ambrosio, MAHINDRA RACING: “I also come from two difficult years, so it’s great to start this new relationship with the team in this way. We’ve worked really hard over the past few months to be ready and I think we were really fast and good in race pace. I’m really happy to be a part of such a great team – there are loads of great people and a great atmosphere. I think we’ve got some good days ahead of us.”