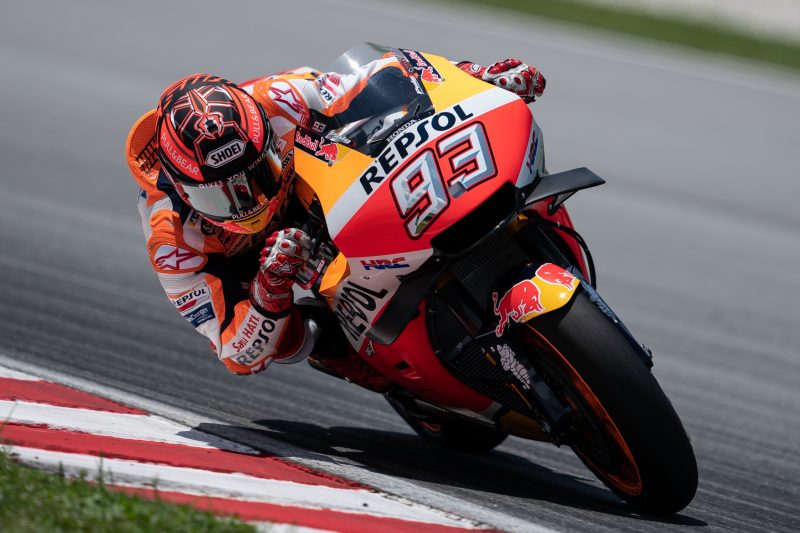 Focusing on quality rather than quantity, Marc Marquez quickly got back up to speed at the Sepang Test as he set the fastest time of the day. With a dry start to proceedings at the Sepang International Circuit, the Repsol Honda Team were eager to get underway and Marc Marquez soon entered the track. Over the winter, a number of new parts and modifications have been made to the RC213V to ensure it will once again be challenging for the MotoGP™ World Championship. The conditions gave Marquez a chance to understand both the 2019 Honda RC213V and the condition of his left shoulder.

Despite only riding until just before 14:00 Local Time, Marquez was able to set a 1’59.621 and move to the top of the time sheets. By ending early, Marquez was able to undergo further physiotherapy on his shoulder and rest ahead of day two at the Sepang Test. Marquez concluded the day as the fastest rider, 0.259s ahead of second placed Rins. Official Test Rider Stefan Bradl continued aboard the RC213V, completing 61 laps and ending day one in ninth place.

Marc Marquez: “I’m very happy to ride again after a long winter, but I was expecting to be better than I was. I still don’t have full power, for one or two laps it’s ok but I had to change my riding style to compensate. We stopped early to save myself for the rest of the test, there are still two days and we will see what the feeling is. Honda have been working really hard this winter and we tried a few things, but the list is really big. We’re trying the most important things first. The bike is already at a good point, but there’s always more to try before Qatar.”