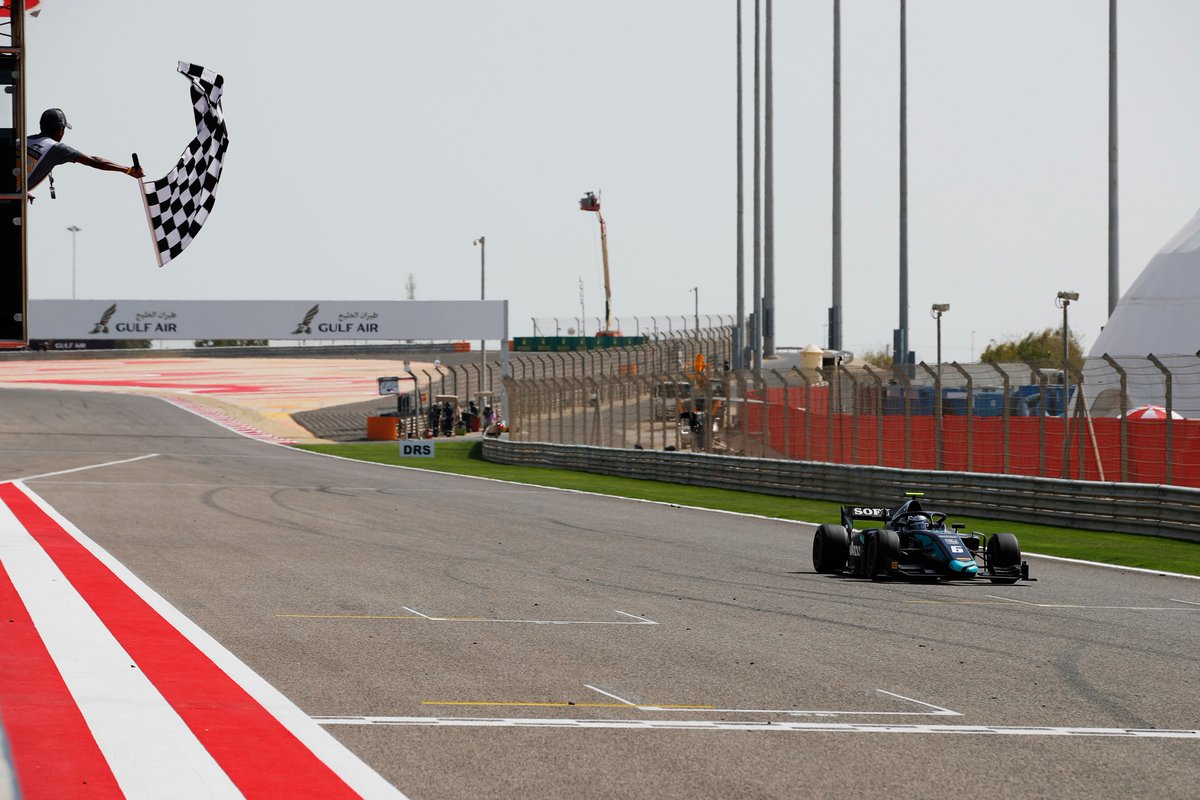 The groundwork for the Canadian’s victory was laid at the start: polesitter Ghiotto had a poor start, fellow front row starter Louis Delétraz had a better one, while storming starts by Nyck de Vries and Latifi saw the Dutchman move up to P2 at turn 1 but the Canadian blast past him at turn 4, with the top 3 already pulling away from Jack Aitken, Nobuharu Matsushita, Ghiotto, Anthoine Hubert and Nikita Mazepin, while a poor start for Sette Câmara saw the Brazilian drop from p7 on the grid to P13 at the end of the first lap. Sette Câmara was soon moving back up through the order, recovering to P8 by lap 5, while out in front the leaders were looking to break the DRS gap to each as well as manage their tyres, a tricky balancing act at the hot, dry circuit, with a view to going as long as possible before the stops. Nobody told Ghiotto though, as the Italian looked to reclaim ground lost at the start as he sliced his way by his rivals, claiming P2 from Delétraz on lap 13 as de Vries came into the pits, the first of the leaders to do so.

The Dutchman was now the target as his rivals came in, and emerging in fresh air helped de Vries to move up the order. Race leader Latifi came in on lap 16, but a slow rear tyre change saw the Canadian emerge behind Delétraz and with a mountain to climb if he was to return to the front, while Ghiotto spent one more lap out but lost time in the process, coming out P6 of the stoppers behind de Vries, Matsushita, Delétraz, Latifi and Sette Câmara. Track position is important in Bahrain, but it soon became clear that tyre life is even more so: Latifi mugged Delétraz for P3 on lap 20 before blasting past Matsushita and de Vries to regain his lead on successive laps and starting to rebuild his big gap to the battle behind him, while Ghiotto got a double tow to blast by Sette Câmara and Delétraz on the front straight on lap 24, with the Brazilian following in his wake; earlier stops saw Matsushita and de Vries unable to stop the train coming for their potential podium positions a lap later.

With the top 3 storming off into the distance all eyes were looking behind them: Latifi ultimately claimed the win by 9s over Ghiotto with Sette Câmara a further 6s back, while Hubert did a superb job of managing his tyres to push up to P4 in his maiden F2 race ahead of Delétraz and de Vries, with Aitken ending a lonely race in P7 ahead of rookie Mick Schumacher, who mugged Matsushita on spent rubber on the last lap for 8th and tomorrow’s reverse pole, with Guanyu Zhou claiming the final point in P10 and 2 more for fastest lap.