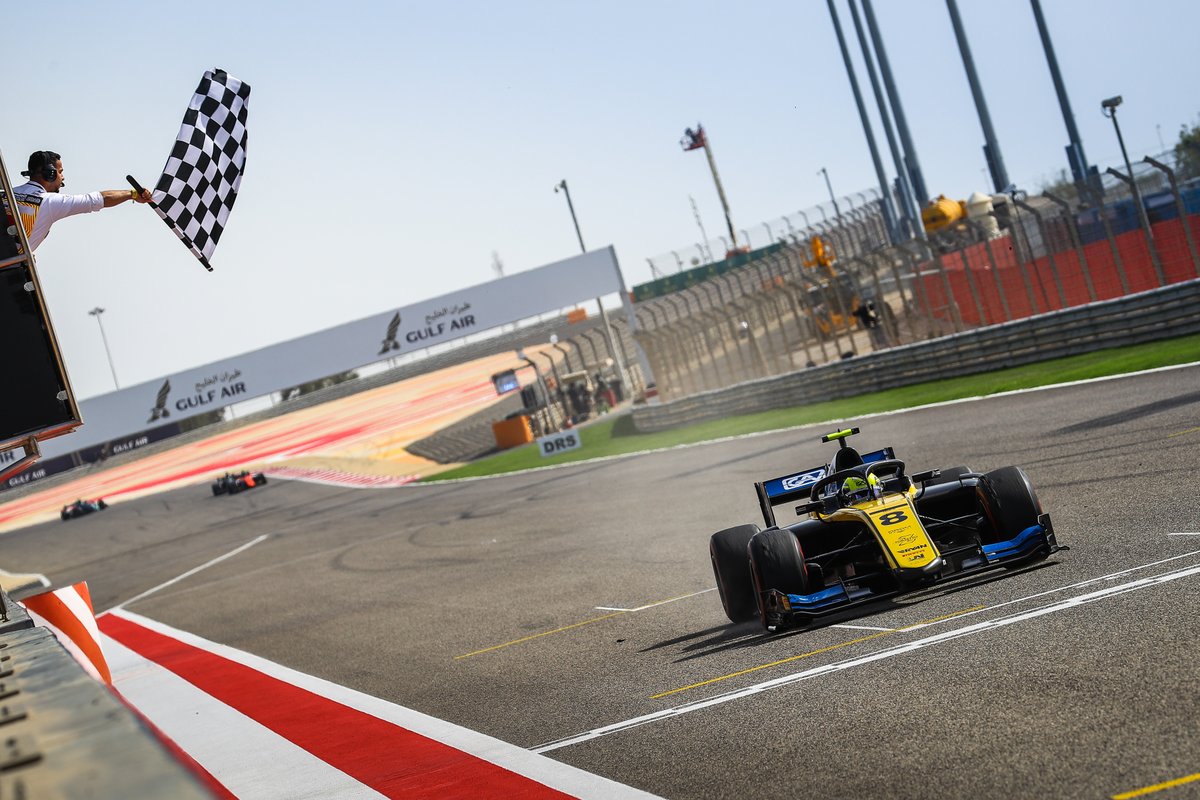 th tyrewear at a premium on the hot and dusty circuit all of the pre-race discussion was about the potential for pitstops, with thoughts focussed on Charles Leclerc’s courageous call in the same race in 2017. But the key to making it work would be the start: when the lights went out polesitter Mick Schumacher cut across to cover Jack Aitken and Nyck de Vries, leaving everyone else to find some space behind them. But yesterday’s podium finishers were looking to bring home more, and were soon on a charge: as the order shook out Sette Câmara led Latifi and Ghiotto through their rivals, slicing forward to finish the first lap just a second behind the German and clearly on a charge. Next time through it was all change, with the Brazilian claiming the lead and Ghiotto jumping Latifi and Schumacher for P2.

One lap later and the Italian was into the lead, setting fastest lap on the way, and was immediately building a big gap back to his rivals: at this stage no one could be sure if he was pushing hard to give him space for when his tyres went off or was looking to make a change, but they were all in admiration of his incredible speed either way. Schumacher was soon back to P4 and falling into the clutches of the chasing pack, led by de Vries after a slick pass on Louis Delétraz, and the Dutchman made short work of passing the German as he looked to get on terms with the top 3. With drivers already saying their tyres were going off it was clear that some were going to risk a stop, and Juan Manuel Correa was the first to do so, on lap 8 of 23.

u Matsushita was the first driver in the points to risk a stop, 2 laps later from P8 to emerge in 17th, but was anyone further up the field going to risk it? The answer was to come on lap 12 when race leader Ghiotto came in, handing back a lead of 6s to Sette Câmara, with de Vries following behind him: the pair returned in P13 and P16 respectively, and were hoping that enough laps remained to make the risk pay off. Ghiotto has long been regarded as a strong overtaker, and on fresh rubber the hunt was on: the Italian was back in the points within 3 laps and was flying, cutting chunks out of the gap forward to Sette Câmara, who was now involved in an unwanted scrap with his teammate for the lead as Ghiotto dispatched his rivals with ease.

By lap 17 he was on the podium, with Schumacher unable to put up a fight, and with a 4s lap advantage the inevitable happened on lap 20: Ghiotto sliced inside Latifi at turn 1 and Sette Câmara at turn 6 to regain his lead before soaring off into the distance, while behind him everyone else was trying to hold onto whatever was left of their tyres to get to the flag. And when the chequer dropped Ghiotto was 5.4s to the good over Sette Câmara and Latifi, with Guanyu Zhou saving enough rubber to make a late charge for P4 ahead of Delétraz and Schumacher, with the German just denying de Vries (who claimed fast lap) at the line for P6, and Jordan King holding on for the final point on his return to the championship.

The win handed Ghiotto the lead in the drivers’ title fight at the end of Round 1, with the Italian on 37 points leading Latifi by 2 points followed by Sette Câmara on 27, Delétraz on 16, de Vries and Anthoine Hubert on 12 and Zhou on 11; while in the teams’ championship DAMS have built an early lead with 62 points over UNI-Virtuosi Racing on 48, Carlin on 18 ahead of ART Grand Prix and BWT Arden on 12 points each as all eyes turn to round 2 of the championship in Baku, Azerbaijan.