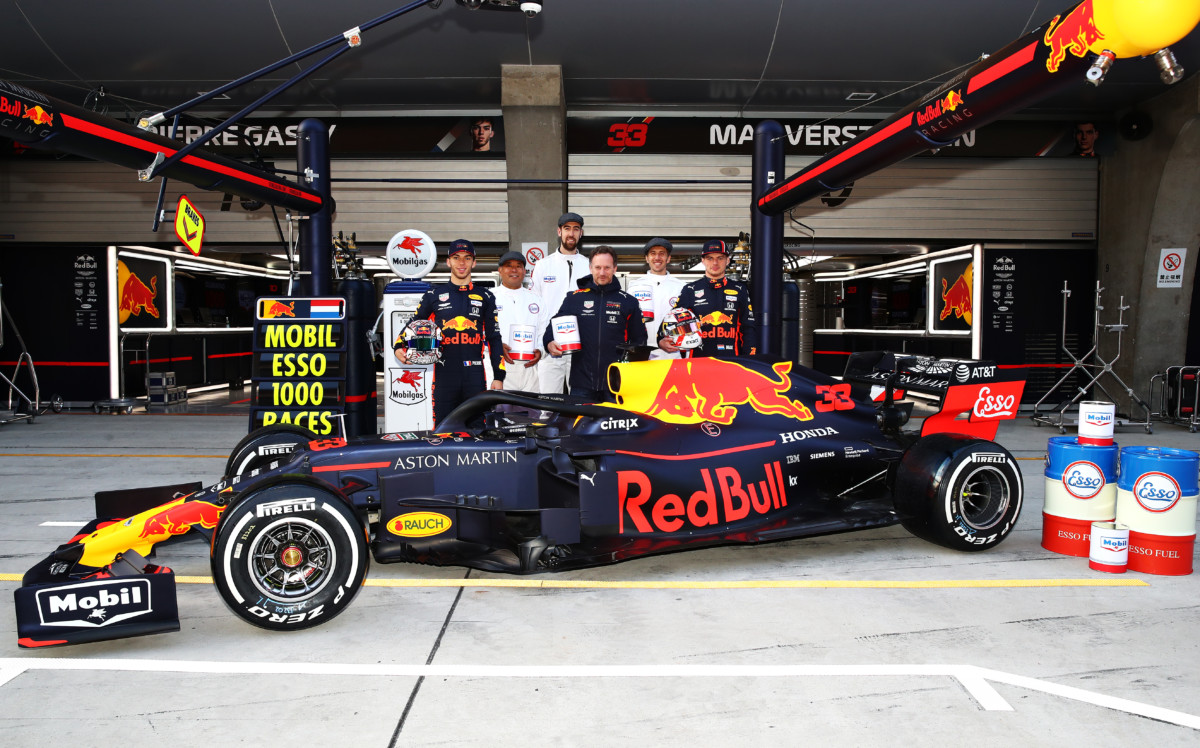 ExxonMobil returns to its heritage look to celebrate its extraordinary participation in Formula One at this weekend’s Chinese Grand Prix in Shanghai, the 1,000th World Championship race.

ExxonMobil brands are one of only a few to have been involved in Formula One since the very first World Championship race at the 1950 British Grand Prix, from which Esso and Mobil have powered some of the greatest teams and drivers through the decades. The legendary Mobil 1 brand entered the sport in 1979 and went on to power multiple teams and drivers to World Championship success, becoming one of the sports leading motor oils. Today, it supplies race-winning lubricants to the Aston Martin Red Bull Racing team.

This weekend in China, Aston Martin Red Bull Racing’s RB15 cars will race with the original Mobil and Esso logos that will also feature on Max Verstappen and Pierre Gasly’s helmets and race suits. The team garage will also display the heritage logos. On Thursday at trackside, Max and Pierre, together with Team Principal, Christian Horner, and current ExxonMobil trackside technicians, posed for a 1950’s themed photo alongside the RB15 race car. The ExxonMobil technicians will be wearing their heritage uniforms all weekend

KAI DECKER, GLOBAL SPONSORSHIPS & MOTORSPORTS MANAGER, EXXONMOBIL: “ExxonMobil boasts a tremendous history, heritage and passion in world motorsport, particularly in Formula One where our brands have been involved from the very beginning when the World Championship began at the 1950 British Grand Prix at Silverstone. The Esso, Exxon, Mobil and Mobil 1 brands have been instrumental in the progression of fuels and lubricants in Formula One for the past seven decades by developing cutting-edge and innovative technology advances. We have achieved this by helping to power and protect some of the most iconic cars, teams and successful drivers in F1 history, winning multiple Drivers’ and Constructors’ World Championships along the way.

mula One Grand Prix racing has provided us with the ultimate proving ground to develop innovative fuels and lubricants and continues to challenge us to explore new technology solutions as the sport evolves at a rapid pace. It remains one of the most demanding environments that not only allows us to further enhance our products but also pioneer new and efficient technologies. We have come a long way in the past 70 years of participation in Formula One, gaining insights and expertise from working directly with some of the world’s greatest racing teams who have driven us to be the very best. The work we have achieved in Formula One has enabled us to offer our customers all over the world the very best fuels and lubricants for the road.”