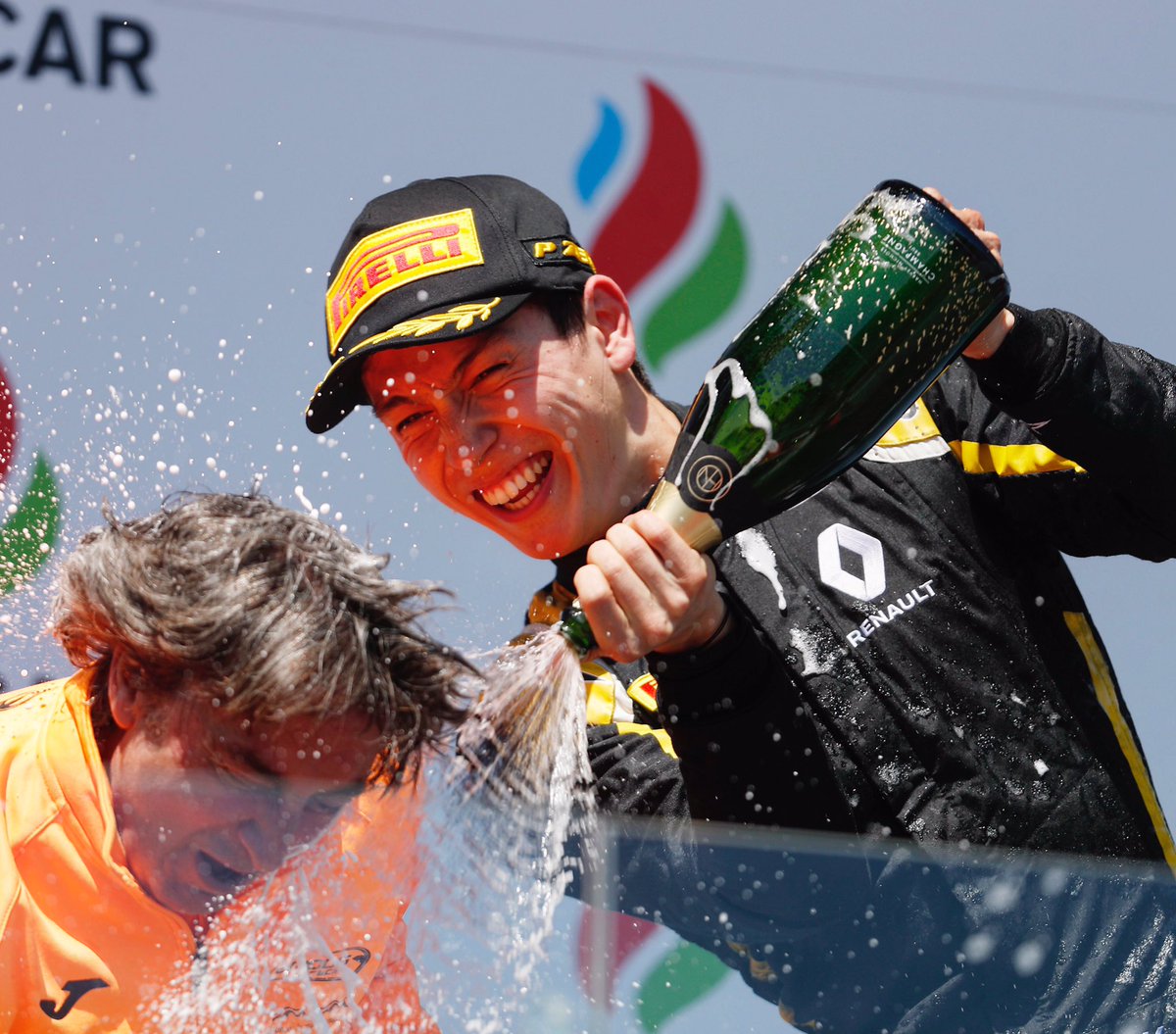 Jack Aitken proved unflappable as he sealed his first ever FIA Formula 2 Feature Race win in chaotic circumstances, at Baku, Azerbaijan. The Campos driver remained composed and surged through the pack, to steer clear of the drama playing out behind him, finishing ahead of ART Grand Prix’s Nyck De Vries and MP Motorsport’s Jordan King. Aitken laid the foundations for his win from the start, on a dry and sunny afternoon at the Baku City Circuit. The Brit started from eighth on the grid, but flew to third on Turn 1, slaloming around his competitors. Also on the up was Dutchman De Vries, who flashed in-front of polesitter Nobuharu Matsushita at the start.

Chaos played out behind them, as the Trident drivers collided, forcing Giuliano Alesi into an early retirement. Louis Delétraz had done well to weave through the collision, but Callum Ilott wasn’t as lucky. He was forced into a front wing change, having been caught up in the crash. The Safety Car was deployed and when the track was clear, the race resumed with De Vries keeping the lead. Matsushita then suffered further frustration as issues with his car saw him plummet down the grid, before pitting. He eventually returned but was already a lap behind the rest of the racers.

Aitken’s first sight of the race lead was handed to him by De Vries, after the ART Grand Prix driver fell foul to a slow pit stop. Tatiana Calderon was the only driver to opt for the alternate strategy and the Colombian led the way after the rest of the cars pitted. The safety car was deployed once more to clean up Mick Schumacher’s PREMA Racing car, after he had spun to a stop in sector 3. Aitken was back on top after he passed Calderon who lost further places to drivers on fresher tyres. The Campos driver was fast being chased by De Vries, who had squeezed past Nicholas Latifi for P2. Further back, King was on the attack and had already stolen P8 from Anthoine Hubert, when Dorian Boccolacci went wide on the final corner, to gift him P7.

The front three were in a league of their own at the front and race leader Aitken had built up a healthy gap to De Vries, but a third safety car period after Guanyu Zhou had slammed into the barrier after getting too close to the back of Juan Manuel Correa reduced that gap to almost nothing. With the safety car still out there, Calderon slowed to a stop down the main straight, with the BWT Arden team ready for her to pit. Further chaos ensued after the Safety Car came in and the race restart was aborted when two more cars were lost: Sérgio Sette Câmara spun on track and was forced to clamber out of his car, while, further behind him Louis Delétraz made contact with the back of Boccolacci and was out of his car too.

Sean Gelael had taken advantage of the turmoil on track to finish off his ascent from the back of the grid. The PREMA man had started P19, but by the time racing resumed, he was up to seventh. King soared around Latifi at the restart, with Aitken looking to re-increase the gap between himself and second placed De Vries. The Dutchman briefly got to within touching distance of DRS range with just a minute to go, but the Brit found further speed from his Campos and couldn’t be touched by the ART driver at the chequered flag. Behind them, King kept his place in third, for his first ever F2 podium. Also in the points were Latifi, Boccolacci, Luca Ghiotto, Gelael, Correa, Nikita Mazepin and Anthoine Hubert.

Racing will recommence tomorrow in the Sprint Race, as Juan Manuel Correa starts on pole in the reverse place grid, with further drama almost a certainty on this unpredictable Baku City Circuit.