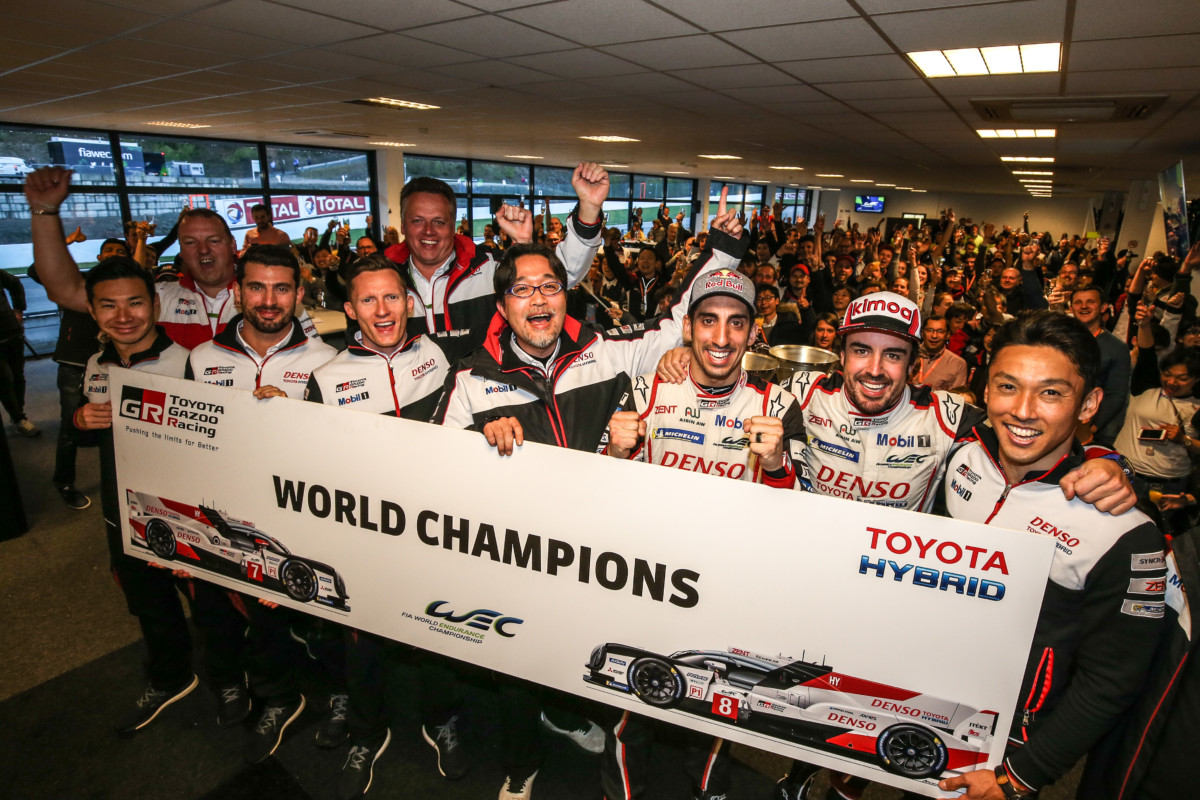 Al termine della 6 Ore di Spa-Francorchamps, penultimo round della stagione 2018-2019, TOYOTA GAZOO Racing conquista il Titolo team nel FIA WEC.Sébastien Buemi, Kazuki Nakajima and Fernando Alonso in the #8 TS050 HYBRID extended their lead in the drivers’ standings to 31 points with one race and 39 points remaining after their fourth win of a season which began with victory at Spa 12 months ago. The #7 TS050 HYBRID crew of Mike Conway, Kamui Kobayashi and José María López had controlled the race until just before half distance, setting the fastest lap as well, but then lost 11 minutes due to a sensor issue which dropped them to sixth at the end.

History was made in the opening laps when heavy snow hit Spa just a few minutes after the start; the first time that snow has affected a WEC race. Remarkably, racing continued for almost 30 minutes until conditions forced a safety car with Mike leading having started from pole position in the #7. After 25 minutes, and now in bright sunshine, the race resumed with Mike leading from the #3 Rebellion. Sébastien, who had lost time in his pit stop, immediately took second place for the #8 and then moved into the lead at the end of lap 19. Another safety car due to an accident a few moments later triggered drama for both cars. Sébastien was forced to make a fuel stop while the pit lane was closed and WEC regulations meant the team was allowed to add only five seconds of fuel.

Mike, who had used less fuel in the opening stint, was able to refuel normally and switch to slick tyres when the pit lane opened, while Sébastien made his regular fuel stop soon after, costing him around a minute and dropping him to 10th. But an exciting race saw further action, with Sébastien using his slick tyres to great effect and battling up to second place by the time both cars pitted under a full course yellow around the two-hour mark, with Kamui taking over the #7 and Fernando the #8. With almost three hours completed, the race took another dramatic turn when Kamui, who had been leading by around 50secs, experienced a sensor issue on the #7. He brought the car back to the pits where the pit crew worked quickly to rectify the issue and allow José to resume, now four laps behind and in 19th position. Kazuki inherited the lead in the #8 but another snow flurry soon after saw both cars switch to wet tyres, which were ideally suited to conditions when a heavy hail storm struck with just under two hours remaining, bringing out the safety car again for around 25 minutes.

Entering the last hour, José had fought his way into the top six while Fernando stretched the #8 car’s advantage to over a lap at the front as more bad weather and another safety car arrived. The race finished a few minutes early when the red flags were waved due to the treacherous conditions. Fernando was at the wheel of the #8 at the end to win by one lap from the #3 Rebellion and #11 SMP Racing, with Kamui bringing the #7 home in sixth, four laps behind after a valiant fight back. The team now heads to France for the season-ending Le Mans 24 Hours on 15-16 June.

Hisatake Murata, Team President: “Congratulations to everyone in the team on winning the World Championship; it is the reward for a lot of hard work over the past year. We faced a challenging race today. I am sorry for the #7 drivers; they all drove really well and it’s a pity they lost the chance to fight for the win due to the sensor issue. The #8 drivers also performed well despite misfortune; congratulations to them. Although such a dramatic race is not easy for the team, I hope the many fans as well as our colleagues from Cologne enjoyed the race despite the weather. Now we look forward to the climax of the season and a race we have been preparing for ever since June last year; Le Mans.”

Mike Conway (TS050 HYBRID #7): “It was one of those races; crazy weather with all four seasons in 10 minutes, then we ran into a technical problem and lost a few laps. Up to that point we had a nice comfortable lead, we were really quick and everyone was doing a good job. José and Kamui both drove great stints to try to make up some positions but with all the safety cars we had no chance to fully recover. So we got the best result available given the circumstances.”

Kamui Kobayashi (TS050 HYBRID #7): “It was a frustrating race for us because we had the car to win and everything looked good until we had the issue. It’s a pity but these things can happen and before that we’d had no technical issues this season. We did our best to recover and showed good performance but after losing so much time there was no realistic chance of the podium. Well done to car #8 on the win and of course a big congratulations to the team for securing the World Championship.”

José María López (TS050 HYBRID #7): “I actually don’t feel disappointed because we did everything we could. We showed that we were the quickest car and that is a nice feeling. We worked well, did everything we had to do and made no mistakes. Unfortunately it didn’t work out but this is endurance racing and it can happen. Congratulations to the team; one of the main goals is achieved. Congratulations also to car #8 for the win. We will keep our heads up and go for the big one now.”

Sébastien Buemi (TS050 HYBRID #8): “A race win for us is very nice of course, but it was a tricky race with the conditions. I’m sorry for car #7 to have the issue when they were leading; it would have been difficult to catch them so they deserved better. We had some bad luck early in the race and I had some radio issues as well which didn’t help. It’s fantastic for the team to win the World Championship. Now we go to Le Mans with a bit of a margin in the drivers’ championship but we are taking nothing for granted. I am looking forward to a good, fair fight in Le Mans.”

Kazuki Nakajima (TS050 HYBRID #8): “It was a crazy race with crazy weather. We were quite lucky to win as it was very unfortunate for car #7; I feel sorry for them. We faced a few difficulties in these conditions so there are some lessons to learn so we are fully prepared for Le Mans. It is a great achievement for the team to become World Champions; that was the biggest target here and now we can celebrate a little bit. We are focused on Le Mans and we have to finish the job for the drivers’ World Championship. We know probably more than anyone how difficult that race can be.”

Fernando Alonso (TS050 HYBRID #8): “That was definitely not an easy race, with a couple of issues in the first part in addition to the weather. So the race was up and down in terms of emotions. The most important thing today was securing the teams’ World Championship. I am extremely happy for TOYOTA GAZOO Racing that we scored enough points to become World Champion; a massive well done for everyone in the team. It has been an amazing season for us and hopefully in Le Mans we can have the final, nice touch with the drivers’ title.”