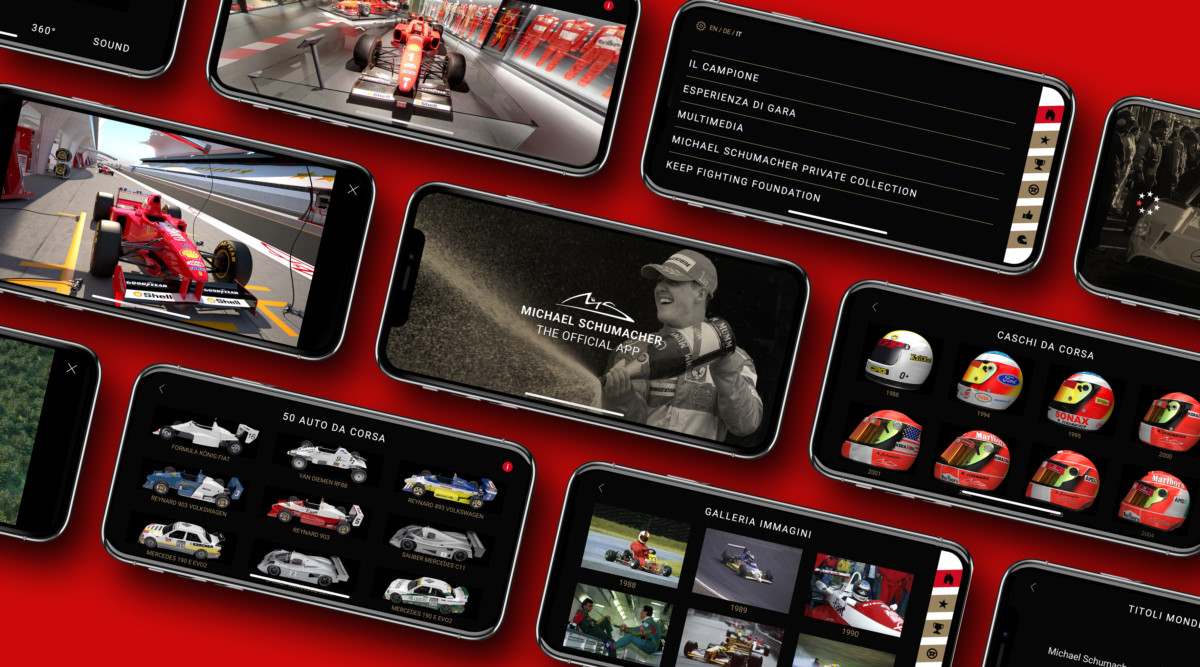 Schumacher. The Official App now also speaks Italian: the virtual museum of the Formula 1 record world champion offers motor sport fans an even deeper experience, expanded in many areas, and impresses with content in Augemented Reality. But the most endearing gesture comes from the fans themselves – three tifosi have translated the entire app into Italian and thus enable their compatriots to share their passion with them.

The new version of the Official Michael Schumacher App is also fun for motorsport lovers because of other features. In one area, Michael’s World Championship helmets can be explored in both Virtual and Augmented Reality. As a special highlight fans can put on these helmets with Augmented Reality and share their photo with Michael’s helmet over their social networks! The Schumacher App, which was released by his family as a gift to Michael himself and his fans for the 50th birthday of the racing icon at the beginning of the year, won the Silver Award at the 2019 World Media Festival. The update will be available as iOS and Android version in the App-Stores from May 4th.

“The Official Michael Schumacher App is a Grand Prix of Memories for every Michael Schumacher fan,” says Sabine Kehm on behalf of the Keep Fighting Foundation. “We are very happy that the tifosi of Michael and Ferrari can now experience the manifold possibilities of the app even better“.

The Official Michael Schumacher App will then show a total of 50 cars from his career including 360-degree rotation, technical data, history and sound. In addition there is a new multi media area with additional videos, insights into the team radio and pictures and animated overflights over the Erftlandring in Kerpen and a fictitious pit lane with insights into the pits. The Michael Schumacher Private Collection section on the permanent exhibition at Motorworld Cologne now also contains a complete list of all the exhibits shown there. Since the first launch of the App, video messages from friends and rivals from Schumacher’s unique career can be followed for each of his cars on display there.