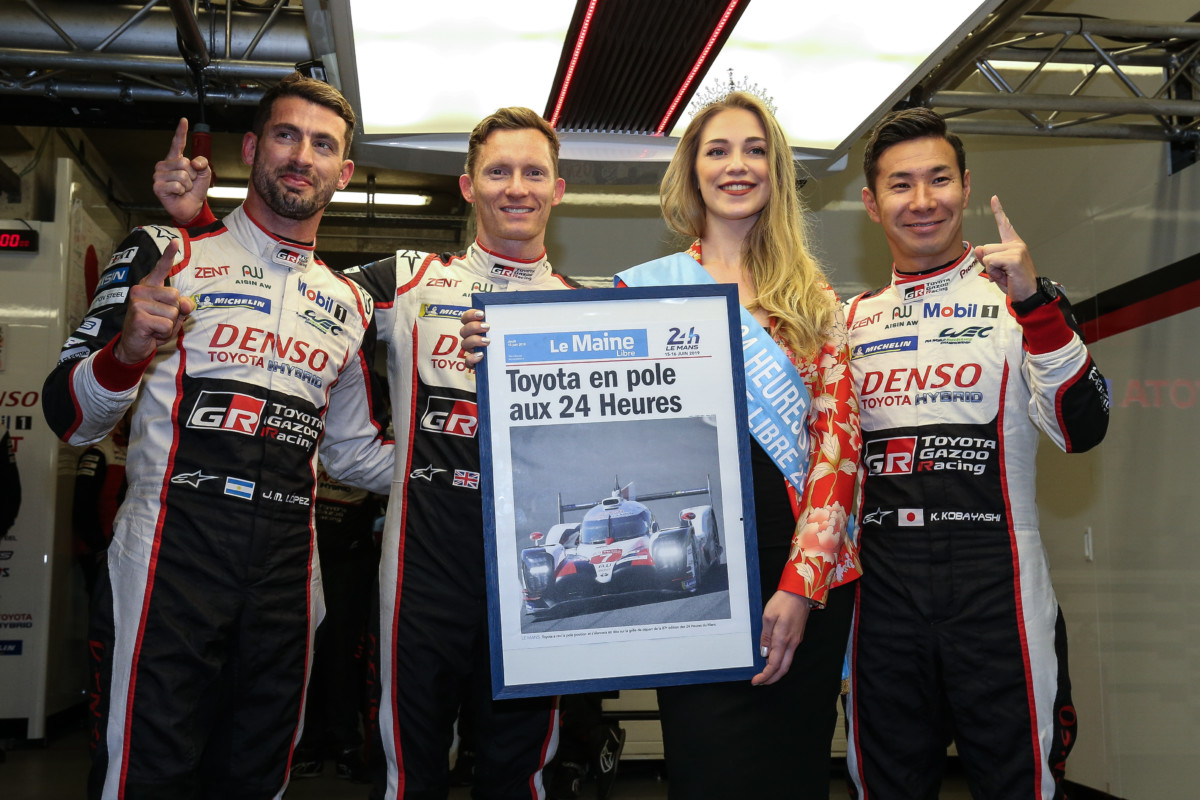 World Champions TOYOTA GAZOO Racing will start the 87th Le Mans 24 Hours from pole position after taking the top two grid spots in a close qualifying at the Circuit de la Sarthe on Thursday evening. Kamui Kobayashi, in the #7 TS050 HYBRID he shares with Mike Conway and José María López, earned his second-ever Le Mans pole, and TOYOTA’s fifth in total, thanks to a lap of 3min 15.497secs set in the second qualifying session. Kazuki Nakajima, who already has two Le Mans pole positions to his name, made it an all-TOYOTA GAZOO Racing front row for the third consecutive year in the #8 TS050 HYBRID in which he, Sébastien Buemi and Fernando Alonso won the race last year.

The point for pole position brings the #7 crew slightly closer to drivers’ World Championship leaders Sébastien, Kazuki and Fernando. They are now 30 points behind with 38 points still to be awarded in the final race of the 2018-2019 FIA World Endurance Championship (WEC) season. Despite heavy showers all week, the decisive final qualifying sessions took place in dry conditions, setting the scene for a pole position shoot-out, with the starting grid determined by the best single lap time from any of the three two-hour qualifying sessions. At the beginning of the evening session, held in daylight, Kamui and Kazuki took new tyres and low fuel for a qualifying attempt in the opening minutes, with both drivers improving on Wednesday’s times. After that, the team’s focus switched to race preparations and optimising the TS050 HYBRIDs for the weekend’s race. After sunset, the final qualifying session also saw Kamui and Kazuki attempt flying laps at the beginning but yellow flags and traffic prevented any improvement before set-up and tyre optimisation took priority.

When the chequered flag fell after a combined six hours of qualifying, the #7 TS050 HYBRID sat on top of the overall timing sheets, 0.411secs quicker than the #8 car. A close qualifying session saw the #17 SMP Racing come within 0.662secs of pole position, while the #3 Rebellion was 0.907secs adrift; not since 2011 has the gap covering the first two rows of the Le Mans grid been less than a second.

Mike Conway (#7 TS050 HYBRID): “A big thank you to everyone who helped to get the car ready for qualifying after the accident yesterday. It was not easy but they put in so much effort and we have repaid them with the pole. It was a great lap from Kamui and a huge team effort. After Kamui’s lap we focused on getting the car ready for the race. It has been a positive day and it’s nice to get the extra point.”

Kamui Kobayashi (#7 TS050 HYBRID): “I am happy to be on pole again here. Actually I was hoping I could improve on my 2017 lap record but I was missing a little bit of time. Two years ago the track conditions and traffic were perfect; it wasn’t quite the same this time. But it’s a great feeling to be on pole and now we put all our effort to get the result on Sunday afternoon.”

José María López (#7 TS050 HYBRID): “It’s great to be on pole position but a little mixed; I want to celebrate but 24 hours is a long time to race and the result at the end of that is the target. Congratulations to the whole team, especially the mechanics who worked so hard to get the car ready. This pole position is for them. Now we push to be fully prepared for the race.”

Sébastien Buemi (#8 TS050 HYBRID): “It has been a good job from the team because we managed to secure a one-two on the grid which was the objective. Well done to the car #7 guys; they did a good job and put in a very quick lap. The first part of the race event is now done; let’s focus on the important bit which is the race. It’s a 24-hour race so let’s see what will happen.”

Kazuki Nakajima (#8 TS050 HYBRID): “I’m pretty happy to be on the front row in second. Qualifying was quite messy, particularly the third qualifying with the traffic. In the second session we had a cleaner run and I was more or less happy with my lap. I could have improved but it was okay. The front row and a strong preparation for the race were the targets and we achieved that.”

Fernando Alonso (#8 TS050 HYBRID): “I feel good with the result; it’s job done for us. We wanted to get both TOYOTAs on the front row and we managed it. The privateers were very close but we performed well to stay ahead and also get ready for the weekend. It’s always tough to race for 24 hours so we will prepare ourselves well on Friday and be ready for the fight.”