Festeggiamenti per i campioni Mercedes a Brackley e Brixworth 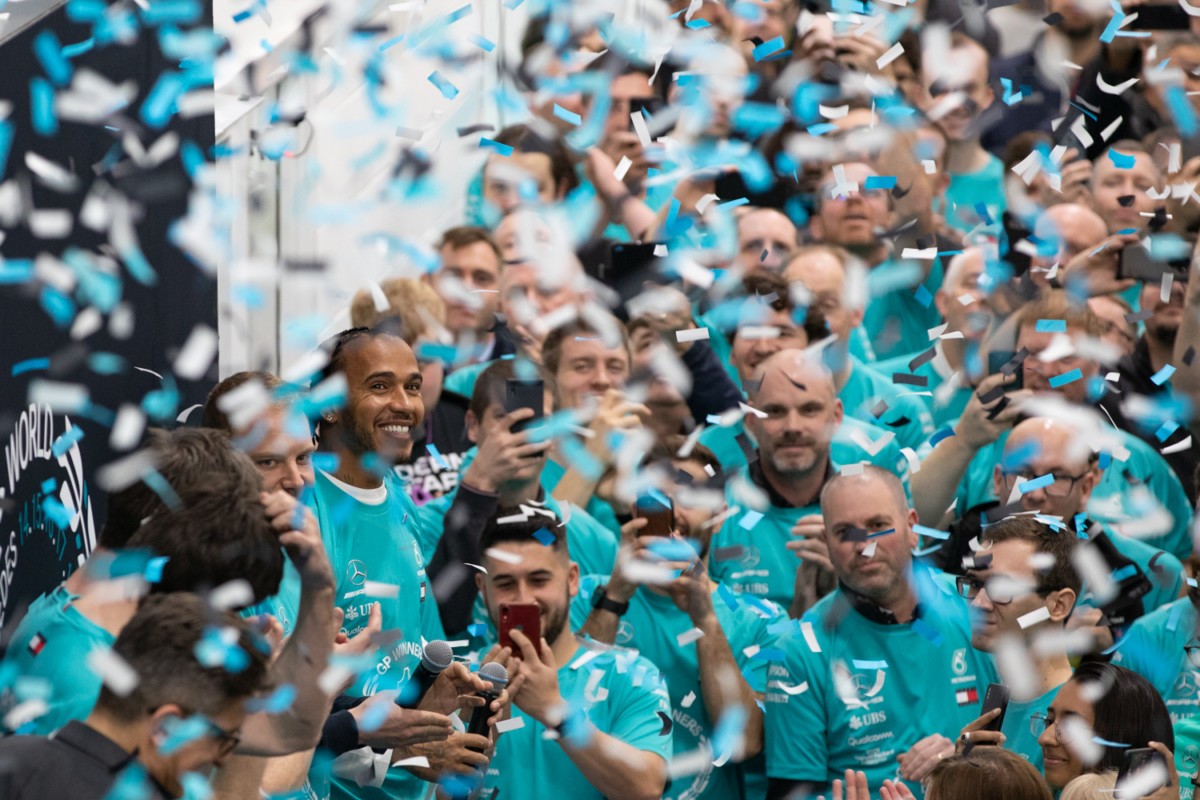 When Mercedes-AMG Petronas Motorsport embarked on the 2019 Formula One season, it had the amazing opportunity to write F1 history: if the team was to win both the constructors’ and the drivers’ championship again, it would become the first ever to claim six consecutive Formula One double titles. The hopes of every member of the Mercedes motorsport family were high, but so were the stakes and the pressure. Yesterday, nine months after the 2019 car first turned a wheel at its shakedown at Silverstone, the team came together in Brackley and Brixworth to celebrate its record-breaking double-championship success. About 1,500 men and women spent months to conceive, design, manufacture, build and improve the Mercedes-AMG F1 W10 EQ Power+ which is now a true, championship-winning Silver Arrow. With two races to go in the 2019 season, the team has secured 14 race victories, nine of them 1-2s, and 695 points.

Toto Wolff : “I remember our first management off-site meeting in 2013 where we put our objectives on the wall -it was the first time we wrote down ‘We want to fight for a championship’. But Aldo Costa said that we should be more ambitious and make it plural – championships. My first thought was that that’s too far-fetched. But we ended up putting it on the wall. And here we are, almost seven years later, having won six double championships. I still pinch myself sometimes because I can’t quite believe it. And this all down to the extremely hard work of this amazing team in Brixworth and Brackley. I feel like a bit of an imposter sometimes because we get to go to the races and take the credit for all the achievements, but it is all of you that make it happen. Thank you very, very much! We’ve achieved something that has never been done before and we’ve done it for Mercedes, one of the best-loved brands in the world – it is something that every single one of you can be extremely proud of.”

Lewis Hamilton: “It’s very difficult to find the right words to express my gratitude to all of you for continuing to push every year – it’s thanks to you that I’ve been living my dream, that I’ve been able to succeed and reach this incredible achievement in my life. I’m incredibly proud to be part of this group and I can’t thank you enough for everything that you’ve done. I never in a million years thought I’d get to six. I grew up watching Formula One and I always wanted to do something like Ayrton. If I could get to Formula One, that’d be great; if I could get three titles, that’d be incredible. And now we’ve doubled that – it’s truly unbelievable. I love to see how motivated you all are, that really spurs me on, and I hope you’ve seen some of that in my driving. Valtteri also has done exceptionally well this year and has been an incredible teammate. I’m really proud to work alongside him and I expect him to be a massive challenger next year. We must keep pushing because I know we have more to do – more championships to win, more races to win – and I truly believe that we can do that. A big, big thank you to you all!”

Valtteri Bottas: “To whom it may concern: Thank you! I have no words to describe how proud I am to be part of this amazing team and how grateful I am for the work that every single one of you has done to make this achievement possible – I can only imagine the workload, the commitment and all the sacrifices you’ve made to make this happen, so thank you very much! It’s amazing to be part of the team that clinched the constructors’ title. Let me repeat something I said last year when I was standing here: Let’s do it all again next year, I know we can do it! Huge congratulations to Lewis as well for winning the drivers’ championship this year – next year it won’t be that easy…”

Andy Cowell: “It’s been an incredible journey for all of us and it’s quite humbling to get together and stand in front of you all. Everybody at Brixworth has worked tirelessly to make sure that both the reliability and the performance of the Power Unit are in a position that allows us to fight for wins and ultimately the championship. The hunger that goes into all the programmes all around the factory is amazing, it’s such a self-motivated group of people that just keeps pushing. And I know that our colleagues working on the chassis have worked equally hard towards the same goal. The victory in Austin was the 100th win for Brackley and Brixworth together and I remember driving to Brackley for the first time back in December 2008. I think no one would have predicted the that it would be the start to such an incredible journey for us. It’s an absolute pleasure to work with all of you at Brixworth and Brackley – this isn’t just a hugely professional group of people but also very kind one and I’m very proud to be a part of it. Massive congratulations to all of not just for the success of this year, but for the success of the last six years where we secured the double. Very well done!”

James Allison: “I’ve said so many times that what all of you manage to do just keeps setting new standards and keeps surprising everyone in the whole world – probably surprising everyone except this group itself. The strength we all have together is utterly remarkable. We must make sure to keep it like this here at Brackley and at Brixworth so that we can enjoy these moments again in the future because they are amazing and they feel fantastic. Thank you very much for everything you’ve done to make it possible. I know that many of you are already working on next year’s car: we’ve got a winter ahead of us that is going to be a tough one and we have a season ahead of us that is going to be even tougher. But I am certain that if we show again what we’ve shown six seasons on the trot, we’ll be there fighting for wins and championships again.”

Mercedes-AMG Petronas Motorsport secured the 2019 FIA Formula One Constructors’ Championship with a double podium at the Japanese Grand Prix in mid-October, with Valtteri Bottas winning and Lewis Hamilton in third place. Three weeks later, Lewis Hamilton clinched his sixth Drivers’ Championship with a P2 finish at the United States Grand Prix behind race winner Valtteri. Ola Källenius, Chairman of the Board of Management of Daimler AG and Head of Mercedes-Benz Cars, sent his congratulations to Lewis upon his remarkable achievement. Three weeks earlier, Markus Schäfer, Member of the Board of Management of Daimler AG, Group Research & Mercedes-Benz Cars Development, had sent his congratulations to the team. Please find their messages below.

Ola Källenius: “Lewis truly embodies our brand aspiration to be the best – both on and off track. He always strives for more, trying to improve every last detail and never stops pushing – both himself and his team. It’s this drive to improve combined with an unrivalled command of the car that has earned Lewis his well-deserved place in Formula One history. Six Drivers’ Championships – all of them powered by Mercedes-Benz – is an incredible achievement and one that fills the entire Daimler family with great pride. Congratulations from your 300,000 colleagues all over the world. Extremely well done, Lewis!”

Markus Schäfer: “To win six consecutive constructors’ championships is something that has only been achieved once in F1 history. For everybody at Daimler, this achievement is not just a source of great pride, it is also a demonstration of our company’s capability to succeed when tackling the biggest challenges. To win in Formula One requires the right blend of cutting-edge technology and exceptional team spirit to achieve demanding goals; the lessons we learn from this success are important ingredients in our ability to achieve the same in our wider business.”