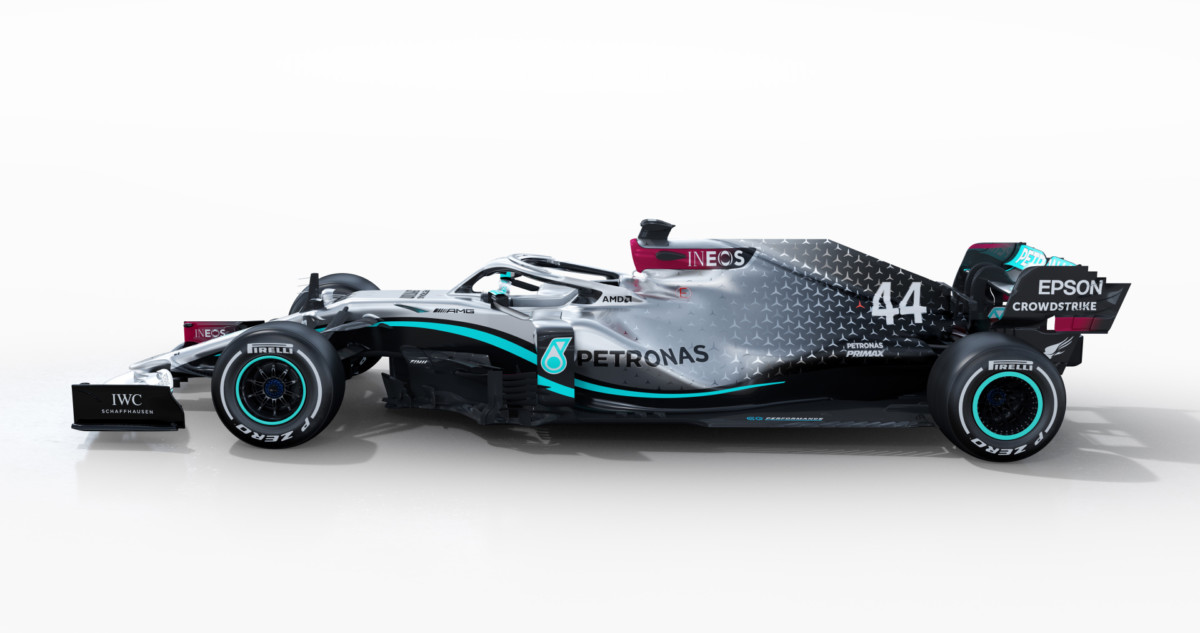 Just 75 days after the last race of the 2019 season, the Mercedes-AMG Petronas F1 Team took to the track this morning to complete the first laps with the team’s all-new car for the 2020 F1 season. The Mercedes-AMG F1 W11 EQ Performance, as the car is officially known, ran at Silverstone with Valtteri Bottas behind the wheel. Lewis Hamilton is scheduled to drive the 2020 contender in the afternoon.

“2020 will be particularly challenging because there will be teams that will put a lot of focus on 2020 and there will be teams that will start to shift their resources into 2021. Getting that balance right will very important, but that’s not an easy thing to do,” said Toto Wolff. “Our ambition is clear: we want to be competitive in both 2020 and 2021. That is a great challenge, but the greater the challenge, the more we like it.”

Named Mercedes-AMG F1 W11 EQ Performance, the new car proudly carries the “EQ Performance” designation. As part of the strategy of Mercedes-AMG, “EQ Performance” stands for the brand’s future Mercedes-AMG performance hybrid models. The EQ Performance designation places the 2020 Formula One car and its state-of-the-art hybrid Power Unit at the forefront of the future Mercedes-AMG line-up, showcasing how F1 technology is pioneering the future of motor racing and automotive technology in general. “W11” represents the fact that this is the eleventh Mercedes-made Formula One car since the three-pointed star returned to Formula One as a works team in 2010. The factories were bustling over the winter to develop, manufacture, assemble and test new components and systems for the new car. Over 100,000 parts were checked in inspection with 40,000 components tested in non-destructive testing to make sure they were up to the standards the team requires; over 8,000 drawn parts created and put through the manufacturing and testing process.

“The atmosphere this year is very calm, very focused – we all know that there’s a job to do and results to be delivered in order to meet our own expectations, so we’re working hard to try and prepare in the best way possible,” said Toto. “We feel no sense of entitlement to win races or championships, we know that we need to fight extremely hard for that as we had to in every year. This has been our mindset from the beginning.”

Today’s running constitutes an official 100 km filming day, which the team also uses as a final systems check before the first pre-season test in Barcelona. This initial test and filming day is known as the shakedown and takes place at the 2.98 kilometre Silverstone International Circuit. Both drivers were eager to get back into the car after their winter break, which included intensive training to prepare for the upcoming season.

“It’s a real privilege for Valtteri and myself to be the only people who get to drive this machine and I’m really looking forward to stretching its legs”, said Lewis Hamilton. “I’ve been in constant communications with the engineers, trying to keep an eye on everything that was happening at the factory. Today is a really exciting day – finally seeing in person what this team has worked towards so hard. As a driver, you’re just itching to get back into the car.”

“The first time I came to the factory this was quite a few weeks ago for a number of meetings with the engineers and we’ve been in touch since then,” said Valtteri Bottas. “It’s been really interesting for me to get more and more involved, learning about all the new features of our weapon for this year’s fight. Developing and building a new car is never straight-forward, it’s a huge effort by every single team member to deliver this year on year. Now things really kick off and I’m very excited to finally get the chance to drive the new car. I’ve been waiting to get back behind the wheel.”

“The shakedown has always been important, but it is particularly precious this year. It’s our last chance to make sure all is well ahead of the first official day of Winter Testing. If all goes well in the shakedown then we will be well placed to roll out the garage at nine o’clock in Barcelona and just start hitting the laps,” said James Allison, Technical Director. “With a shorter winter testing programme, that last ticking everything off at the shakedown is proportionally more important so we are determined to squeeze every drop of goodness from it that we can.”

The Mercedes-AMG Petronas F1 Team will stay true to the driver line-up that won the team the 2017, 2018 and 2019 Constructors’ Championships – Lewis Hamilton and Valtteri Bottas. Both drivers completed an intensive training programme in their winter break and are eager to get behind the wheel again.

“I’ve had the best winter training yet,” said Lewis. “Over the winter, I’ve really been trying to analyse where we were last year and how I can grow and improve as a driver and as a human being. Having great consistency is going to be key for all of us – not just in terms of our reliability, but also for us as drivers. This team works so hard to give us this incredible machine, but if we put a foot wrong out there, it costs all of us, so that’s something I’ve really been trying to focus on – how can I take it to another level as a driver, how can I extract more from myself and from the team, and trying to deliver something really great this year. This is my eighth year with this team and this year’s challenge is super exciting. I have no doubt every single team member will try to raise the bar within themselves and I’ll be trying to do the same.”

“I think this has been my best winter training so far,” said Valtteri. “I did a lot of different training routines in different climate zones; I’m ready and prepared and I can’t wait for the new season to start. I actually did quite a bit of driving as well – from rally cars to dog sleds in the snow in Finland. This season is going to be really challenging, but I know that every single member of this team will give it everything to put us in the best possible position for the fight.”

The driver line-up will be complemented by two drivers sharing reserve driver duties on the race weekends: Mercedes-Benz EQ Formula E Team race driver Stoffel Vandoorne who will support the F1 team; and Esteban Gutierrez in addition to his role as the team’s Simulator and Development Driver. Both Stoffel and Esteban will play an important role in supporting the team’s 2020 challenge with their duties in the factory and at track.