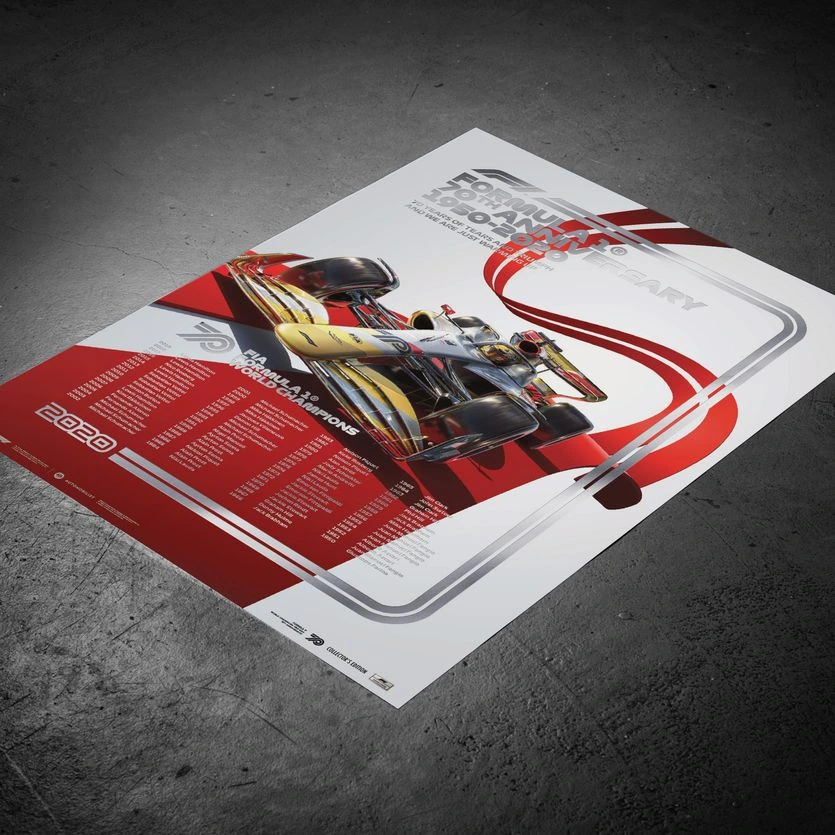 Marking its platinum anniversary on May 13, Formula 1 in partnership with Automobilist commemorates the completion of 70 years with a series of three special posters as a token of appreciation to fans, followers and all those who have enriched the history of this sport. The 3 Special Edition Commemorative Posters have a unique outlook – a design inspired by the past, present and future. Featuring in them is the list of 70 Champions across all years of the sport, and the car of the future, a perfect amalgamation of winners that have been and the potential of racing yet to come.

F1 raced to an official start on May 13, 1950 with the British Grand Prix amidst royalty and fanfare at Silverstone, with 11 drivers making it across the chequered flag. Last year, at the Formula 1 Chinese Grand Prix 2019, Automobilist came together with Formula 1 to create a special poster marking the 1000th race in the history of the sport. Based on the success and enthusiasm that poster was met by (limited edition prints sold out prior to the  start of the race), this collaboration was envisioned as a tribute to the sport, and an offering to loyal F1 fans and supporters across generations.

Pavel Turek, CEO Automobilist: “As part of our continued partnership with Formula 1, we are excited to create these posters that represent the past, present and future of the sport with the names of all the past world champion drivers from Giuseppe Farina, who also won that very first race at Silverstone, right up to Lewis Hamilton, one of a select band who appear on the list more than once.”

Joan Carrera López, Senior Manager, Retail & CPG Licensing, Formula 1: “The history of our sport over the past 70 years is packed with tales of bravery, determination and overcoming impossible odds. It’s only fitting that in the year that marks our 70th anniversary, will test the determination and resilience of the sport. History gives us much to celebrate and on this occasion, we asked Automobilist to produce these 70th anniversary posters given their proven level of quality and authenticity that characterises their work. We are sure that collectors and race fans will be equally impressed.”

On the occasion of the 70th anniversary, Automobilist has produced three posters:

Each piece is uniquely numbered, and carries the official Formula 1 hologram. The car featured on all three pieces of artwork is in fact a rendering of what the Formula 1 car of the future will look like, based on the new technical regulations, which were due to be introduced next year, with the change now planned for 2022.  The hallmark of all Automobilist pieces is their attention to detail. In the case of these posters, the production process, which took around two months, is built on 3D data of the car that enhances details, while ensuring that the actual car livery reflects the message of 70 years of Formula 1. A final hot-foil gold embossing pays tribute to the rich history of the sport.