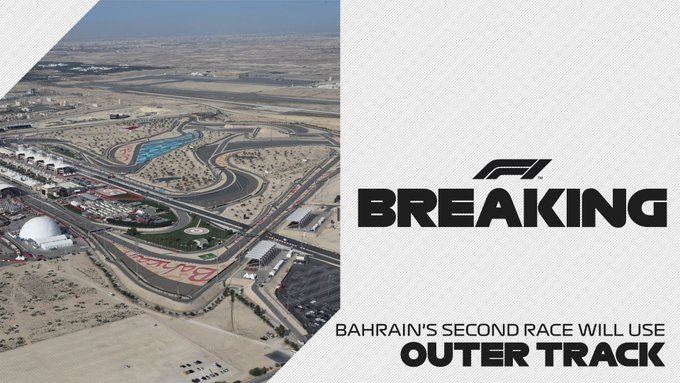 Formula 1 is set for sub-60s lap times after it was confirmed that December’s Sakhir Grand Prix will be run on Bahrain’s ultra-quick 3.543 km ‘outer track’. Following a detailed analysis of the different track layouts available in Bahrain, all of which have an FIA Grade 1 license, Formula 1 has concluded that the 11-turn outer circuit – which has never been used for an international race – is the most suitable option for the second of Bahrain’s double header races on December 6. The Sakhir Grand Prix will be a full night race with both qualifying and the race taking place later in the evening compared to the Bahrain Grand Prix, which will take place the weekend before using the usual 5.412 km international track layout. With such a short track – the second shortest on the calendar after Monaco – the Sakhir GP will be an 87-lap race to ensure the 305 km official minimum distance is met – that’s the most racing laps of any Grand Prix this year.

F1 simulations predict qualifying lap times below 55 seconds, and race laps below 60 seconds. The only sub-60s pole time in F1 history came in 1974, when Niki Lauda lapped Dijon-Prenois in his Ferrari in 58.79s. The shortest lap time seen in recent times was Valtteri Bottas’s pole lap in Austria earlier this year of 1m 02.939s. The outer track takes in Turns 1, 2 and 3 of the international track, before breaking away at Turn 4 for a series of quick sweeps before re-joining the familiar track at Turn 13. The characteristics of the outer track are likely to play a big part in shaping the action in both qualifying and the race – a shorter lap with fewer corners usually leads to closer times in qualifying, but more traffic in the race, so fans can expect frenetic action.

F1 raced on Bahrain’s 6.2km ‘endurance’ layout in 2010, but Ross Brawn, Managing Director of Motorsport, Formula 1, said the outer track was considered the “best alternative” when it came to picking a different layout for race two. “We are excited to announce the outer circuit as the format for the Sakhir Grand Prix and want to thank our partners at the Bahrain International Circuit for their continued support. We assessed a number of options for the alternative circuit layout and concluded the outer circuit will provide the best alternative and will provide a new challenge for all the teams and entertain all our fans with high speeds and fast lap times.”

Sheikh Salman bin Isa Al Khalifa, Chief Executive of Bahrain International Circuit, added: “We thank Formula 1 for all their work in analysing options for our second race and it’s a great testament to our venue that we will be able to hold what is likely to be very contrasting races on consecutive weekends. Our outer track has never been used for international competitive racing, so will be a new and exciting challenge for all participants.”

The Bahrain International Circuit, in collaboration with The Bahrain Motor Federation and the FIA, will be working over the coming weeks to ensure all elements of the track are prepared and tested according to current standards for an F1 race.