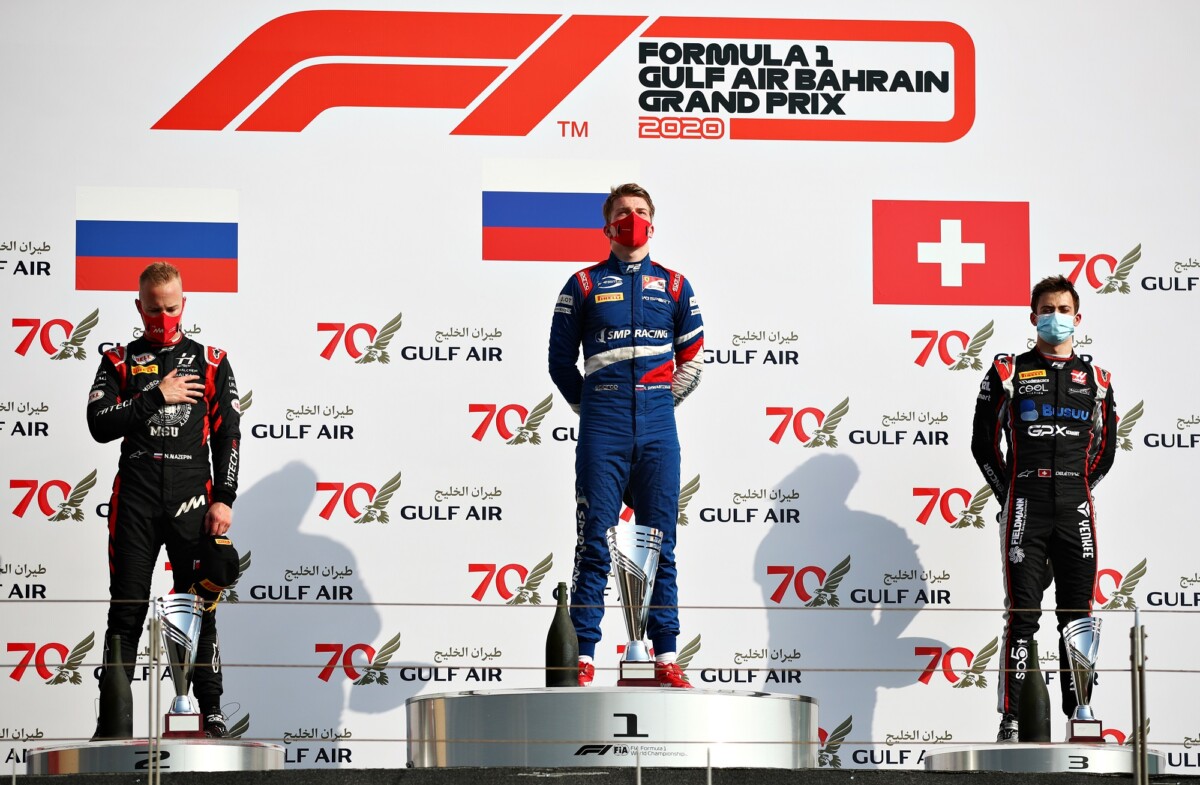 Robert Shwartzman made a dominant return to the top step of the F2 podium, leading the Sprint Race from lights-to-flag in Sakhir for his fourth winof the season and his first since Round 7. The PREMA racer beat out his Championship rival Nikita Mazepin, who moved up to third in the standings and kept himself in the title fight heading into the season finale. Louis Delétraz clinched his fifth podium of the year in style, making up 13 places with a stunning charge through the field from 16th. Championship leader Mick Schumacher will take a 14-point lead in the final round of the year, finishing in seventh, with his main rival Callum Ilott failing to score after a collision with Jehan Daruvala. Yuki Tsunoda was also unable to score after a coming together with Marcus Armstrong in the opening laps left him with a puncture and chucked him to the back of the field.

Shwartzman stuttered ever so slightly off the line, as Tsunoda dived through the middle and attempted to take the inside line at the first turn, but the Russian recovered superbly, defending the position at the corner and getting back ahead. Tsunoda’s teammate Daruvala got an equally strong start from sixth, lunging up to fourth when the lights went out and getting ahead of Schumacher and Mazepin, who both lost a position. The title rivals began a back and forth and Schumacher narrowly avoided contact as Mazepin budged past him at the first corner. Tsunoda’s strong start unravelled as contact with Armstrong left him with a puncture on his right rear and forced him into an unwanted pitstop on Lap 2, returning 21st. Meanwhile, Shwartzman had broken away from the pack, building a 2.6s gap over Armstrong. Racing was brought to an abrupt halt as Théo Pourchaire’s fire extinguisher went off, forcing him to pull over onto the side of the road and retire, bringing out a Safety Car. Delétraz made the most of the opportunity, diving into the pits and switching to the hard tyre.

Shortly after the restart Daruvala got caught up in a three-car collision at Turn 10. Ilott had spotted title rival Schumacher lock up on entry and attempted to dive down the inside, but locked up himself and collided into a helpless Daruvala who was sent spinning out. Schumacher managed to get away scot-free but Ilott wasn’t as lucky, with the UNI-Virtuosi man forced into the pits for a new front-wing. His misery was then compounded as he was handed a drive-through penalty, which all but ended his chance of points. Meanwhile, Pedro Piquet had made the most of the carnage, slipping past Schumacher and nabbing P4 before the Virtual Safety Car was deployed to clear up Daruvala’s Carlin. Race leader Shwartzman brushed off the restart to continue his assault to the chequered flag. Armstrong wasn’t as fortunate. Despite initially pulling away cleanly, Mazepin fired past for second and left him to deal with the plucky Piquet. The Charouz racer was immediately on his tail, sliding left and right as he searched for a gap, eventually finding space and firing past. Schumacher was under pressure behind him as Guanyu Zhou lunged in-front for fifth.

Delétraz was making the most of his fresher tyres, darting through the pack and into the points. Moves on Christian Lundgaard, Schumacher, Zhou and Armstrong all followed as the Swiss racer stormed towards a potential podium place. Standing in his way was his teammate Piquet, but the two never got a chance to battle as the Brazilian suffered from a mechanical issue and was forced to pull over and retire – ending his chance of a maiden podium. Shwartzman cruised to a fourth win of the season ahead of Mazepin and Delétraz. Armstrong retained fourth ahead of Zhou. Lundgaard, Schumacher and Drugovich took the final points places.