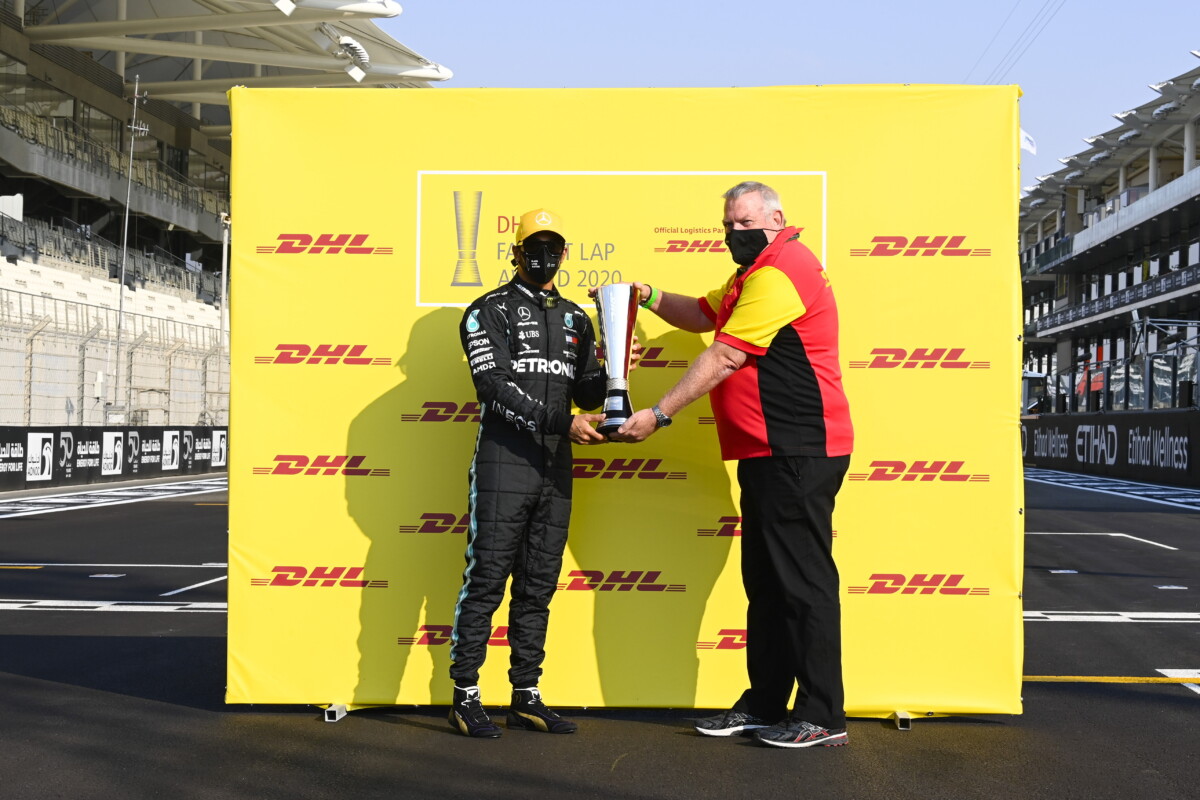 The historical 70th Formula 1 season 2020 finished with the final race in Abu Dhabi. Traditionally DHL, the official logistics partner of the motorsportseries ,took this as an occasion to announce the winners of its two DHL ‘Fastest Awards’. This season, world champion Lewis Hamilton has again defended the DHL Fastest Lap Award, which is presented to the Formula 1 driver with the most fastest laps in a season. Hamilton (Mercedes-AMG Petronas F1 Team) topped the table again this year with six fastest laps, ahead of Max Verstappen (Aston Martin Red Bull Racing), who claimed the fastest lap three times.

For Hamilton, the award represents another record in 2020. He has drawn level with Michael Schumacher at seven world titles this year and is also the only driver to have won the DHL Fastest Lap Award five times since the award’s inception in 2007. Formula 1 has again been slightly faster in 2020 than in previous years, with new lap records set at the Red Bull Ring, the Hungaroring, Silverstone Circuit, Circuit de Catalunya-Barcelona and the Nürburgring.

In the pit-lane, Red Bull really does seem to give you wings: the Aston Martin Red Bull Racing team has won the DHL Fastest Pit Stop Award in 2020. It is their third win in a row, and they are clearly a cut above: in the 17 races this season, Red Bull had the fastest pit crew 15 times. Max Verstappen has benefited from the fastest pit stop eight times, while his teammate Alex Albon has been the beneficiary seven times.

“The new records show that the drivers and teams have coped well with the many changes in the race schedule and with the infection prevention measures that are in place,” said Arjan Sissing, Head of Global Brand Management at Deutsche Post DHL Group. “The race logistics have also worked really well in a difficult environment because in this pandemic year of 2020 we have had to plan international races within just a few weeks. Our experience has enabled us to offer safe, fast and reliable logistics in Formula 1 even under extraordinary conditions.”

As a result of the COVID 19 pandemic the original 22 race calendar proposed for the 2020 season, was reshaped into an epic 17 racing spectacle. The rapid response and short-notice nature of the planning presented F1 and DHL’s race logistics team with major challenges to overcome to put on this memorable season. DHL has been active in Formula 1 for nearly 40 years, and official logistics partner since 2004. DHL ensures the smooth transportation of race cars, fuel and equipment to racetracks around the world. The transport volume comprises up to 2,000 tons, which must be transported within the shortest possible time and with high reliability. To this end, DHL employs a team of motorsports logistics specialists, who work closely with Formula 1 management and the racing teams. Just as it is out on the track, the “race behind the race” is all about speed, precision and state-of-the art technology.