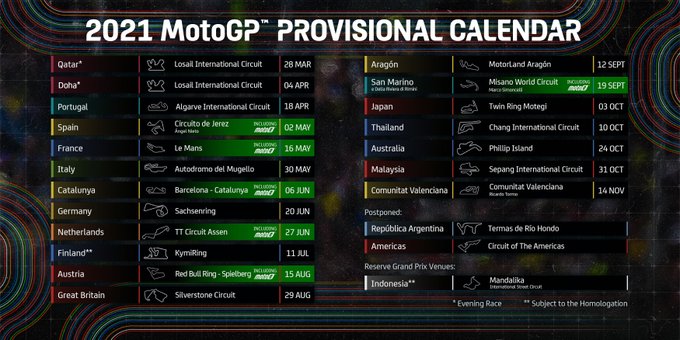 The first race of the 2021 MotoGP World Championship is due to begin on March 28th at the Losail International Circuit in Qatar, but initial revisions issued by the FIM, IRTA and Dorna Sports reveal an updated calendar. An official statement issued by www.motogp.com states: “The season opening Grand Prix in Qatar remains confirmed for the 26th to the 28th of March and it will now be followed by a second event, the Grand Prix of Doha, at the same Losail International Circuit the following weekend, from the 2nd to the 4th of April. The Autodromo Internacional do Algarve in Portugal will then host the third round of the Championship from the 16th to the 18th of April before the paddock heads to the Circuito de Jerez-Angel Nieto as previously planned. The ongoing Coronavirus COVID-19 pandemic, and resulting lockdowns and complications, sadly oblige the postponement of both the Argentina GP and the Americas GP until the last quarter of 2021. Any further updates or changes will be provided as soon as available“.