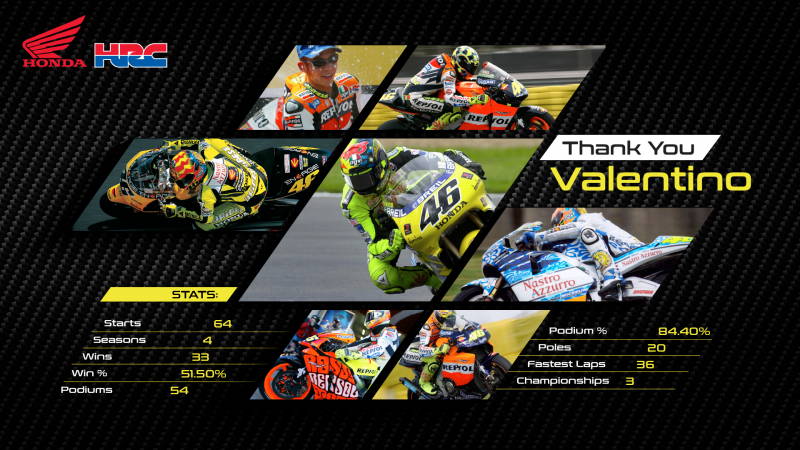 Honda Racing Corporation would like to extend their sincerest thanks to Valentino Rossi and wish him all the best for the next stage of his life as an illustrious 26-year Grand Prix career comes to a close. Together with Honda HRC, Valentino Rossi took three straight premier class World Championships from 2001 to 2003, winning 31 of the 48 races in this period and establishing himself as a force in MotoGP.

After a strong premier class debut in 2000 aboard the Honda NSR500 where he finished second, Valentino Rossi went on to take the final premier class two-stroke title aboard the iconic Honda machine. A dominating season saw the Italian rider finish more than 100 points ahead of his nearest rival. During this 2001 season Rossi achieved a milestone for Honda as he took Honda’s 500th Grand Prix win with a thrilling ride at Suzuka. This title would see out the 500cc class and take the last of the NSR500’s ten World Championship titles and 132 wins. For 2002, a new era began in the premier class as four-stroke 1000cc machines were introduced and Honda debuted the RC211V with Valentino Rossi inside the Repsol Honda Team. Missing the top two just once that season, Rossi again went on to take the title and cementing the combination of the #46 and the RC211V as a force in the premier class. In its debut season the new RC211V, with its dominating V5 engine layout, won 14 of the 16 races and was on the podium at each event. 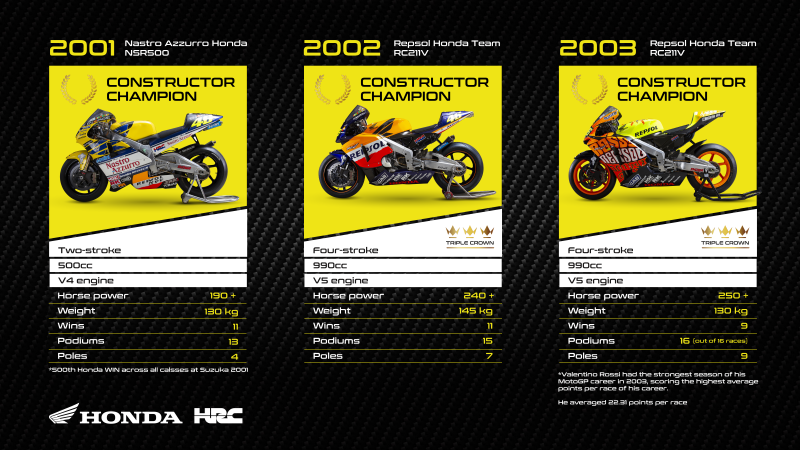 2003 followed a similar pattern as Rossi finished on the podium in all sixteen Grands Prix that season and claimed a third straight title with Honda. One of the standout moments of the 2003 season was at the Australian Grand Prix, Rossi pushing the RC211V to overcome a ten second penalty. Eventually finishing 15 seconds ahead of second place, Rossi won the race despite the penalty. The season, and his time with Honda, ended in style with a special one-off livery at the final race of the year in Valencia. Often referred to as the ‘Austin Powers bike’, this final Rossi era RC211V remains one of the most memorable liveries of his career. 2003 would also be Valentino Rossi’s most dominant season in the premier class as he averaged 22.3 points per race. The RC211V would take a total of 48 wins, 33 of them belonging to Rossi, before the RC212V was introduced in 2007. Alongside the Italian, Nicky Hayden also claimed a World Championship aboard the machine during the thrilling 2006 season.

Since leaving Honda, Rossi has continued to be a fierce competitor and rival on the track. His level of competition has continued to help push Honda HRC and its riders to achieve their best on track. Now his Grand Prix racing career comes to an end, but ‘The Doctor’ leaves behind an incredible history and a defining chapter in motorcycle racing. Honda Racing Corporation would like to thank Valentino Rossi for his collaboration, cooperation and competition over the years and wish him all the best as he begins a new stage of his life away from the circuit. ありがとう Vale !

Brasile: in gara strategia più probabile a due soste 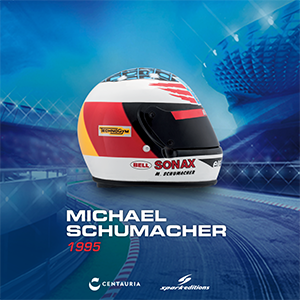