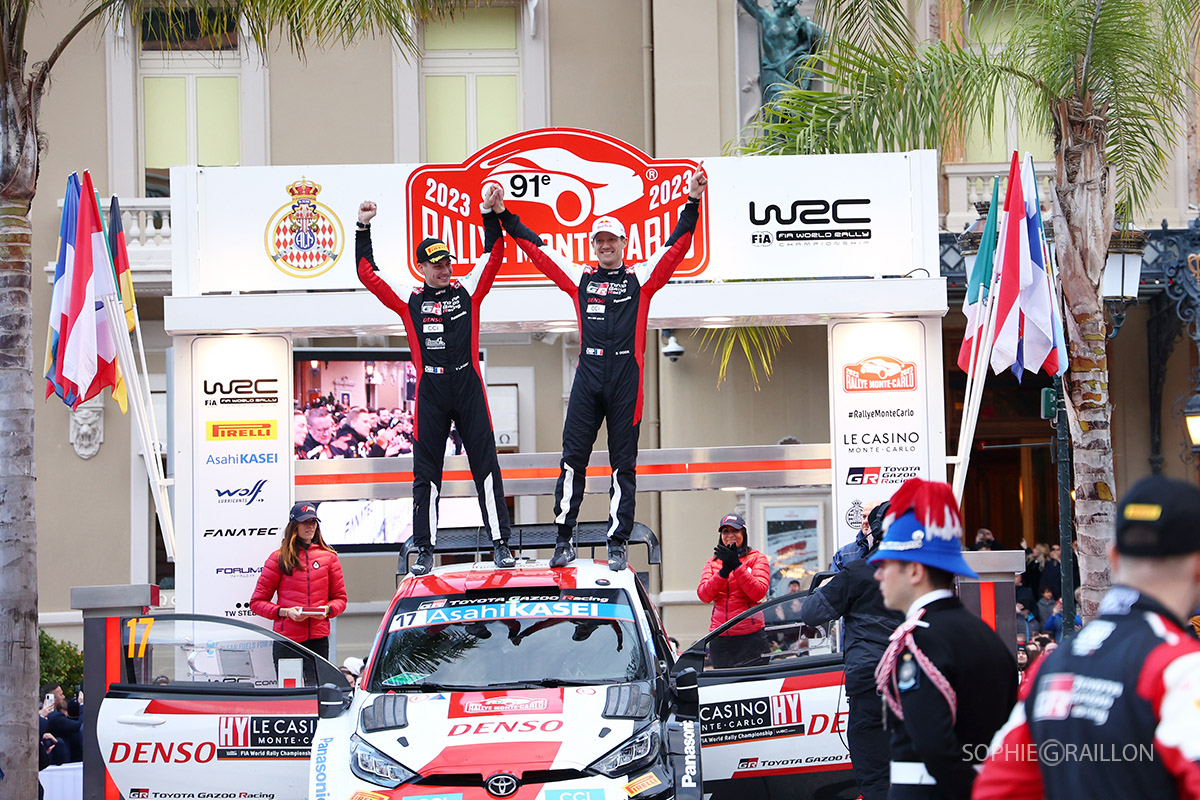 Sébastien Ogier celebrated a record ninth triumph at Rallye Monte-Carlo, confirming a lights-to-flag victory at the opening round of the 2023 FIA WRC on Sunday afternoon. Ogier is undertaking selected drives for Toyota Gazoo Racing this year and kicked off his part-time campaign with a stellar performance in the French Alps, mastering twisty asphalt roads to head GR Yaris team-mate Kalle Rovanperä by 18.8sec in a dominant 1-2 for the Japanese squad. His nine victories span three decades and have been achieved with five different manufacturers. Topping off Ogier’s perfect weekend was the fact that co-driver Vincent Landais celebrated his maiden win at world level. The Frenchman led the season opener from start to finish after charging to a lead of over 30 seconds during Friday’s first full day of action in the mountains above Monaco. Rovanperä reduced that deficit to just 16.0sec heading into Sunday’s finale, but Ogier, who was denied glory by a late puncture 12 months ago, kept his cool to maintain the buffer throughout the final four speed tests.

“It’s huge,” Ogier beamed. “I love this rally. It’s the one which gave me the dream right at the beginning and I am so happy for Vincent. For me it’s nice, but for him it’s a dream to take his first win. We still need to enjoy these moments and that’s why we are still here [in the WRC], to catch some victories like this. To win a famous one like Monte has no price.”

Rovanperä finished on a high by winning the Wolf Power Stage to add five bonus points to his tally. As the highest-placed full-time driver, the young Finn’s title defence is off to a solid start. “It was a good one,” he agreed. “I think we can be quite happy with second place.”

Heavy tyre wear prevented Hyundai i20 N driver Thierry Neuville from making any gains on Rovanperä. After 18 stages, the Belgian was forced to settle for third overall, 27.8sec ahead of Elfyn Evans. For Evans, there were thoughts of what could have been. Were it not for a rear puncture which cost the Welshman over 40 seconds on Friday, a 1-2-3 finish for Toyota could well have been on the cards.

Ott Tänak went easy on his soft compound tyres in preparation for an all-out attack on the bonus points-paying Wolf Power Stage, but he missed out on the benchmark time by just half a second. Ending his M-Sport Ford Puma debut with a top-five result, Tänak felt like he’d made positive steps. “It’s a long season ahead but this is a positive start,” the Estonian remarked. “At least we have scored some points already – unlike the previous three years!”

Takamoto Katsuta was lucky to finish the event after limping through the finale with damaged rear suspension. The Yaris youngster held onto sixth overall by 14.9sec from Dani Sordo, whose Hyundai was plagued by a hybrid unit fault all day. A subdued Esapekka Lappi finished eighth overall on his Hyundai debut, while WRC2 stars Nikolay Gryazin and Yohan Rossel completed the top 10.

The championship switches to Scandinavia next month for the only pure winter round of the season. Rally Sweden takes place in Umeå on 9 – 12 February.